A healthy appetite – even if it happens to be so “healthy” as to be unhealthy -- has something admirable about it. M.F.K Fisher has written:


“I cannot believe that there exists a single coherent human being who will not confess, at least to himself, that once or twice he has stuffed himself to the bursting point, on anything from quail financiere to flapjacks, for no other reason than the beastlike satisfaction of his belly. In fact I pity anyone who has not permitted himself this sensual experience, if only to determine what his private limitations are, and where, for himself alone, gourmandism ends and gluttony begins.”


“would begin his meal by sitting six inches from the table and would quit only when his stomach rubbed uncomfortably against the edge.”

There is, in gluttony, a fundamental affirmation of pleasure and passion.


“Something about the serious glutton (or in any case, some serious gluttons) inspires a certain respect for the life force – the appetite – asserting itself in all that prodigious feasting. It’s not unlike our secret feelings about various Don Juans and Casanovas; even as we understand the compulsive quality of their behavior and destructive effects it has on their hapless lovers, we can’t help feeling a grudging regard for so much sheer sexual energy.” (Francine Prose, Gluttony) 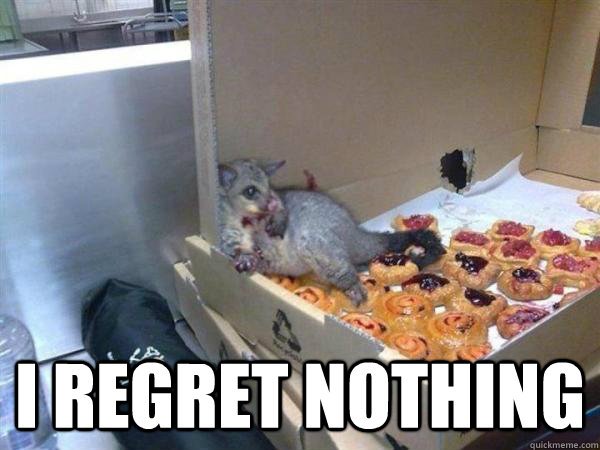 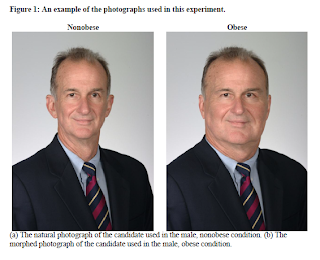 Our hearts go out to the Australian possum who, a few months ago, got into a bakery (in Australia) one night, and ate and ate until it could not move. The owners came in the next morning and found it lying in a tray of pastries with such an enormously swollen belly that it couldn’t even try to get away. The photograph of this possum in this state went around the internet, with the caption: “I regret nothing.”

We have a certain admiration for unrestrained gusto for the pleasure of life. The fastidious fasting, dieting self-deniers are not so fun to be around.

Indeed, in men, at least, in some ways we have less trust for a guy who, apparently, doesn't have a "healthy appetite." A group of voters read a description, along with a photo, of a hypothetical candidate for office. The group that saw the photo of the lower-weight man (on left) reported less likelihood of voting for him than the group that saw the more heavy-set version (on right). The description of the candidate was identical in both cases. (For more on this study: click here.) In fact, in the summer of 2008, journalist Amy Chozick wondered whether Barack Obama's trimness were a liability -- and found some support for her thesis. (See here.) Perhaps, in this culture, we have grown up with positive associations with the rotund Santa Claus? Or does Clement Moore's description of the "right jolly old elf" reflect a pre-existing attraction to men whose bellies shake "when they laugh, like a bowl full of jelly"?

In any case, it's a different story for women: female candidates do better to be thin. We have heard for decades that some of the same things that are positive for men are judged negatively in women. Behavior approved as "assertive" in a man, for example, is judged "bitchy" in a woman. With the increasing numbers of women executives, many workplaces have begun to see reduction in the assertive/bitchy gender bias. The same "few extra pounds" that make a man more trustworthy and likable, however, continue to earn women a more negative assessment. (Likewise: the sexual gusto of Don Juan or Casanova that might, despite ourselves, elicit a "grudging regard," will be judged with a condemnation less mitigated when manifested in a woman -- notwithstanding the mileage that a few comics such as Chelsea Handler get out of their sexual exploits.)

At the same time, as male obesity rates in this country in the last 10 years have climbed faster than, and are now almost equal to, female obesity rates, we are often harsh with ourselves (whatever our gender) and – secretly or not-so-secretly – with others (whatever their gender) who we perceive as overweight. Aside from the public health concern that in the last 50 years obesity has become what some are calling epidemic, there’s the spiritual issue of our relation to our food. Why did the Church leadership 1500 years ago regard gluttony as a root sin, an origin point of spiritual anomie? Their idea was that


“worship of the senses in general and of the sense of taste in particular turns our attention from holy things and becomes a substitute for the worship of God.” (F. Prose)

Saint Paul called it worshiping the belly. Thomas a Kempis in the 15th century put it:


“When the belly is full to bursting with food and drink, debauchery knocks at the door.”

For both Saint Augustine and Thomas Aquinas (himself quite a large fellow), the issue wasn’t strictly the eating and drinking itself, it was the desire for it. To be oriented toward our own desires for direct sensory gratification – to be consumed by the urge to consume – is to be tied up in our selves.

Obsession with food manifests both in over-eating and in its opposite, extreme fasting. The leaders of medieval communities were concerned with “the rogue monk tempted to eat more than his share, but also” with


“nuns (for they were almost always nuns) who succumbed to the equally disturbing and disruptive temptation to indulge in excessive fasting. These women, whom the historian Rudolph Bell has termed ‘holy anorexics,’ punished their bodies by starving themselves and indulging in all manner of inventive and frequently disgusting self-mortifications.” (F. Prose)

Posted by Meredith Garmon at 10:29