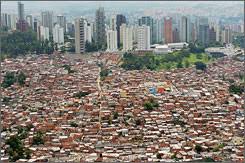 Rather than send people away, restorative justice invites people in. There are a variety of ways to do that. One of them was devised by Dominic Barter in Brazil.

Dominic Barter, an Englishman from north London, went to Brazil in 1992. He found a land of beauty and a people with a tremendous joy in living. He also found an enormous disparity between those with access to wealth and those without it, and high levels of social tension and violence. Gradually he began to form connections with people and with various projects in the shantytowns. As he interacted and listened, people told him about the conflicts in which they were embroiled. These were communities in Rio de Janeiro that were pretty-much beyond any police control -- communities run by armed gangs. People in these communities were largely on their own to work out resolutions of their conflicts. Some of those ways worked fairly well, actually, and others didn’t. Of the various approaches that organically emerged, Barter’s work was in finding what worked, combining it with other things that worked, eventually seeing an overall system emerge, and then helping that spread.

What emerged for him, he calls Restorative Circles.

The approach assumes there are always three parties in a conflict. The first two are called "authors" and "receivers" -- rather than "offenders" and "victims." "Offender" and "victim" may sound like a permanent state of being, and one that allows a given person to be, at most, only one. Authors, on the other hand, are those who have done some action that needs to be talked about. Receivers are those who felt, willingly or otherwise, an effect of that action. The language “author” and “receiver” identifies participants as playing roles we all play at various times. In fact, in one given interaction we are likely to have done both some authoring and some receiving. "Author" and "receiver" are more free of the connotation that the action authored was inherently wrong or that the impact received was intrinsically harmful.

The third party is the wider community.

In one restorative circle there might be a number of authors, and a number of receivers, and some people who are both, and others who are neither. While some forms of restorative justice are particularly victim-sensitive – oriented toward an encounter with the offender that will yield some satisfaction for the victim – Dominic Barter’s approach is not skewed toward sensitivity to the victim. His Restorative Circles are contexts for dialog as equals.

Authors, receivers, and community representatives come together in a circle – sometimes a pretty big circle. There’s a facilitator who guides the conversation through three stages.

The first stage is to re-establish the ability to hear each other. Everyone in the circle has the chance to speak to any other member of the circle and tell them what they want them to know. After someone speaks, address their remarks to someone else in the circle, the facilitator asks the listener to say in his own words what he heard. If he doesn’t get it quite right, to the speaker’s satisfaction, the speaker clarifies, and the listener tries again.
And so on, as many times as necessary until the speaker is satisfied that she’s been heard.

Then the next speaker addresses someone. And so on, until everyone in the circle who wants to say something to anyone else in the circle has a chance to do so, and to receive back from that person a satisfactory confirmation that she has been understood. It may take a long time, but it’s crucial to re-establish the ability to hear each other.

* * *
This is part 3 of 5 of "Restorative Justice"
Next: Part 4: "Making Healing Part of Justice"
Previous: Part 2: "Incarceration Nation"
Beginning: Part 1: "Crime and Punishment"

Posted by Meredith Garmon at 08:47