What is evil? What are we saying when we call something "evil"?

LoraKim and I lived in Minnesota for one year, 2000-2001. There is an invasive species of plant there called “buckthorn.” There was a member of the Rochester, Minnesota congregation who had made it his mission to combat the prolific encroachment of this bush. I heard from him how buckthorn was pushing out native plants, displacing habitats for native animals, upsetting the prairie ecology of the region, and how great lengths have to be taken to kill it or it will spring right back. “Buckthorn is evil,” he said. He looked like he meant it.

Or consider this. There is a certain sort of water bug that swims up under small frogs and injects a virulent poison that dissolves the living frog from the inside, allowing the bug to suck out the nutrients, leaving only an empty skin floating in the water. Do you kinda want to call that evil?

Evil has been a regularly invoked concept in US foreign policy. Ronald Reagan called the Soviet Union the Evil Empire. In 2002, President Bush named Iran, Iraq, and North Korea an “Axis of Evil.” Remember that? Andrew Marlatt was prompted to write a satirical news piece:


“Bitter after being snubbed for membership in the ‘Axis of Evil,’ Libya, China, and Syria today announced they had formed the 'Axis of Just as Evil,' which they said would be way eviler than that stupid Iran-Iraq-North Korea axis. . . . Elsewhere, peer-conscious nations rushed to gain triumvirate status in what became a game of geopolitical chairs. Cuba, Sudan, and Serbia said they had formed the Axis of Somewhat Evil, forcing Somalia to join with Uganda and Myanmar in the Axis of Occasionally Evil, while Bulgaria, Indonesia and Russia established the Axis of Not So Much Evil Really As Just Generally Disagreeable. Canada, Mexico, and Australia formed the Axis of Nations That Are Actually Quite Nice But Secretly Have Nasty Thoughts About" the US. (Full column: see here.) 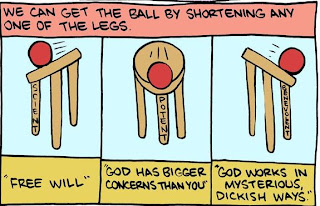 In traditional theology, the problem of evil is one of the thorniest issues. If God made everything, didn’t God make evil, too – and if so, why? She gave us free will – but she’s omniscient, so she knows how we’ll use our free will. Why did she make us that way? (There are a lot of different ways to be good. We'd still have free will if we used it only to choose among various ways of being good. We can all have free will without anybody being evil.) "Theodicy" is the field of theology that aims to address the problem of evil and reconcile God's omnibenevolence, omniscience, and omnipotence with the occurrence of evil in the world.

Just because we are religiously liberal doesn’t mean that we, too, don’t wrestle with what evil is, and why. We may not frame the issue in the traditional way, but theodicy -- the challenge to offer some accounting of evil -- is an issue for everyone.

So what is evil? Let's first notice the way the concept is invoked.

I was working as a hospital chaplain in North Carolina in 2001 when terrorists flew hijacked 747s into New York’s Twin Towers. At the next morning's gathering of the hospital’s five chaplains and our supervisor, I said I wished I understood better what might lead someone to fly an airplane into a building. One of my colleagues asked, “You do believe in evil don’t you?”

I do notice that the word, the concept, “evil” is often a thought-stopper. I see it used to stop thought. We say something’s evil, and we’re off the hook to look into the matter any more deeply. "It’s evil – what more do you need to know? End of story." End of thinking.

Posted by Meredith Garmon at 19:01