The Wound that Cuts Through Every Human Heart 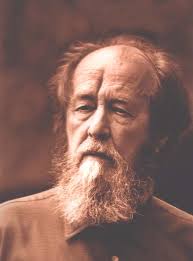 
"If only there were evil people somewhere insidiously committing evil deeds, and it were necessary only to separate them from the rest of us and destroy them. But the line dividing good and evil cuts through the heart of every human being. And who is willing to destroy a piece of his own heart?"

Again with the evil-and-must-be-destroyed idea! Still, there's an important point here. If we drop the concept "evil" and replace it with "sociopath," the implication (an implication which yesterday's Lake Chalice fostered and which today we shall seek to correct) is that we need only make appropriate arrangements for dealing with sociopaths. Yet there is something -- something that Solzhenitsyn calls "evil" -- which "cuts through the heart of every human being." If we seek a liberal theology of theodicy, then an understanding of sociopathy, however accurate and compelling, is incomplete. We must also name the tendency to unmindfulness to which all flesh (and spirit) is heir.


“an ongoing process of dedication to reality at all costs.”

We are ever called to an ongoing process of dedication to reality at all costs. The reality to which we are called to dedicate ourselves is that we are interconnected, all made up of the same stuff. Dedication to that reality means practicing to keep that truth ever before us. The people for whom Peck uses the word "evil" are people who obscure from themselves, in one way or another, a clear view of reality. And that tendency to obscure reality from ourselves does, as Solzhenitsyn put it, cut through the heart of every one of us.

As I read the case studies that Scott Peck presented, I noticed that the people he called "evil" were deficient in two connected and overlapping areas in their way of relating to other people. They lacked sincere gratitude, and lacked any clear sense of personal responsibility. When things go well, the patients Peck describes seem to believe they did it all themselves. And when things go awry, it’s always someone else’s fault. These patients, as I see them, are suffering from a sense of division. They feel separated from the world, they have a definite divide between an always-virtuous “me,” and an often-thwarting “out there.”

I believe that the very act of calling them evil perpetuates exactly the same false divide. Buddhists say “drop those attachments that are distorting your perception – and see things exactly as they are.” This isn’t easy. It is, just as Peck says, an ongoing process of dedication to reality at all costs. With that dedication to wholeness comes gratitude and humility -- the salve (thence, salv-ation) for healing that wound cutting through every human heart.

If we drop the concept evil, it doesn’t mean that harmful actions disappear. We have to respond to actions that harm, whether those actions result from intent or from negligence. Our response must include:


“mindfulness concerning the ways we ourselves and those around us dehumanize others, perpetuate evil by categorizing others as less than human.” (Rev. Mary Katherine Morn, who was once my minister, back in Nashville, TN)

We cannot stand for spiritual wholeness while demonizing those who lack realization of that wholeness. We must celebrate and be aware. Celebrate the whole of creation. Be aware of the constantly surrounding beauty and love, and cultivate gratitude and humility.

We must do this. Whatever else we may do to respond to that which would negate celebration and awareness, we must also do this: celebrate the whole of creation, and be aware of the constantly surrounding beauty and awe.

* * *
This part 6 of 6 of "Theodicy: Addressing Evil"
Previous: Part 5: "Answer Evil with Justice and Community"
Beginning: Part 1: "The Evil Thought-Stopper"

Posted by Meredith Garmon at 08:43