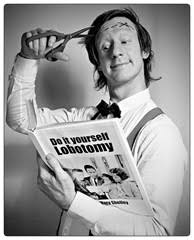 No, lobotomies for everyone is not a good idea. Those of us who have functional frontal lobes would rather not lose those capacities. We like the job that the frontal lobe does. It's just that sometimes it works overtime, collects time-and-a-half, and busts our payroll. We need the frontal lobe to do its job, and we also need it to take breaks and vacations so that we can have some time to get out of living in the future and spend some time living right here, right now.

How do we do that? Some suggestions:
For some people the only time they aren't in the grip of the frontal lobe is when they're dwelling in memories. Take a few minutes to cultivate being right here, right now. Dwell in the present: neither the past memories nor the future plans.

We don't want stop the frontal lobe from doing its job, but we do want to be able to put that job in context. We need not be wholly consumed by our imagined future. It’s possible to have our plans without being so wrapped up in them that we have no identity apart from them. That is: we can have our plans without our plans having us. Plans, after all, even the best-laid plans of mice and men, do go oft astray.

Find the stillness within which the busy-ness of our mind takes place -- the context of silence surrounding the mind's chatter. The only way to find that stillness is take some time to be still: attention on nothing but the breath: for the breath is right now. It's not re-living old memories; it's not all wrapped up in planning. It's now. For a second thing, the breath is the place where you and not-you are constantly changing places. It's the place where interconnection is direct, immediate, and vivid – if we're paying attention to it.

By taking a break each day from being dominated by, consumed by, and identified with the frontal lobe's fabrications, when you come back, and the planning function resumes, you are better able to hold your own planning activity within a mindful awareness.


“Happiness isn't just the limited positive states we strive for, but rather there is a larger openness that includes sorrow and joy. That's true happiness.” (Gaylon Ferguson, Buddhadharma 2008 Spring, 36)

Through the development of present-moment-mindfulness, suffering doesn't disappear from our life. Rather, it disappears into our life.


“When we live our life as a whole, there is no longer an aspect that gets singled out as 'suffering.'” (Barry Magid, Buddhadharma, 2008 Spring, 37)

Life does have loveliness to sell. Are you buying?

Posted by Meredith Garmon at 07:19