A Most Excellent General Assembly Adventure

The Unitarian Universalist Association's General Assembly 2012 in Phoenix was my 12th GA. My first GA was 1998 in Rochester, NY.

Beth Johnson (minister of the the Palomar UU Fellowship in Vista, CA, and current president of the UU Animal Ministry) and LoraKim Joyner (community minister based in Gainesville, FL, past president of the UU Animal Ministry, and my spouse and erstwhile co-minister) are, like, BFF (though I haven't heard them use that lingo). LoraKim remains on the UUAM Board and heads UUAM's "Reverence for Life" program (see here). Through the year she and Beth are regularly in phone or Skype contact, and the three of us have enjoyed each other's company at past GA's. Beth and I hung out often at this GA, discussing various issues and plotting the formation of a commune that either would or wouldn't allow nonhuman companion animals. I emailed to LoraKim to inquire about whether Beth's preference for "5 cats and 3 dogs" would be acceptable. She replied:


"Depends on how many people are there. That's a lot of resources to be using up, but if enough people are sharing the dogs/cats, then perhaps in some scale it knocks down the nonhuman companion/human companion ratio."

But let me speak of General Assembly itself. It was amazing.

At my first GA in 1998, I was amazed at moderator Denny Davidoff's skill at guiding Unitarian Universalist wrangling toward decisions in which majorities ruled and minorities felt honored and included. When her term ended, I thought no one else could have those skills. But Gini really is amazing -- bringing a hipper style to the wise, nonanxious presence at the helm.

I will always remember an episode, a few years ago -- at the 2007 GA in Portland. The agenda was tight, and we were running a little behind schedule. A proposed Action of Immediate Witness was under consideration, and the debate was heated. The proposal called for repeal of 'Don't Ask Don't Tell,' and in those days there were advocates for queer rights on both sides, and they formed lines at the Pro and Con microphones to take their 2 minutes each speaking for and against the proposal. In the midst of this, a delegate stepped to the Procedural microphone, which always takes precedence over the next speaker at the Pro or Con mics.


Gini: I recognize the delegate at the procedural microphone.
Delegate: I'm ____ from ____. Madam Moderator, what is probably more important than whether this Action is passed is the conversation and its complex issues. I was wondering if there were time for prayer?
Gini (not pausing a second): There should always be time for prayer.

And a couple thousand Unitarian Universalists entered into thunderous silence in that cavernous convention center hall, and prayed. Gini said, "To whomever we pray," and asked "that delegates be reminded there is enough love to go around if we create it; Let us be centered, forgiving and caring."

That was five years ago. In Phoenix, Gini was as lovely, gentle, and wise as ever.

I had actually watched Hinojosa's hour-long Frontline program "Lost in Detention" which first aired on PBS last October. (If you haven't watched it, please do: see here.) As harrowing and horrifying as the immigration detention system is, as revealed in "Lost in Detention," the impact didn't hit me until I heard Hinosjosa's Ware lecture.

What I was taking Peter Morales' word for before, I am now more firmly convinced of. Our injustice to immigrants is the most significant social justice issue of our time in the U.S. See the Frontline "Lost in Translation," and then watch the video of Hinojosa's Ware Lecture (see it here) and I'm confident you'll agree.

At the same time, we must also be aware of how our current system pits oppressed people against each other -- for instance, in grant programs that fund assistance only for groups that can prove they are more oppressed than other groups. In the competition for the distinction of "most oppressed group," we all lose. (This was a point made during a talk I heard during "Ministry Days" when the ministers gather for a couple days immediately before General Assembly begins.) The abuses of immigrant detention must be seen not just as an immigrant issue or a hispanic issue. If my country can do this to anybody, then everybody is in danger. So let's stop comparing the levels of oppression of various groups -- for this only helps solidify the status quo -- and let's recognize that if we allow the kind of treatment that is now going on in these detention facilities, then that treatment is more likely to befall anybody. Indeed, if we wake up to the truth that we are each other, then we realize that those abuses are happening to us.

Saturday was the day of the vigil at tent city. Most of GA attendees were in their yellow "Standing on the Side of Love" (SOSL) t-shirts for the day. A number of our clergy had yellow clergy shirts with the SOSL heart logo on the sleeve.

A delegation of a few UU leaders had a tour of Tent City before the rest of us arrived. Read about the delegation's experience (see here).

We got on buses, and we went to the "tent city" detention facility. There were a couple thousand of us.

The Associated Press coverage of the event (article here) was carried in 247 newspapers across the country.

Check out the "Storify" account of the vigil: see here. 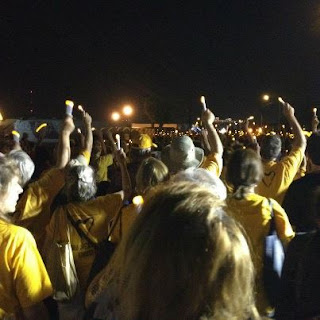 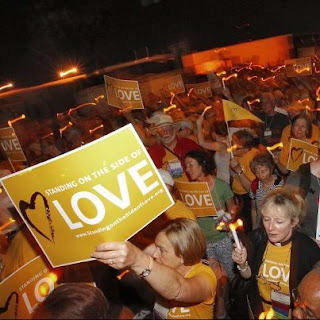 Here's some UUA video of the vigil. (At 32 seconds in, there's a shot of the interior of one of the buses. That's me on the left -- yellow hat, about 5 rows back.)

The local news in Phoenix devoted a nearly-four-minute story to covering the vigil. "Look at that crowd!"


Arriving at Tent City from UU World on Vimeo.

The next day after the Saturday night vigil was the final day of GA. At the end of the last plenary session, Gini Courter gave her annual moderator's report.

She said: "All over the country UUs expect transformation,” -- both personally and socially. This "Justice GA" of 2012 has transformed what GA is.


“The Rev. Dr. Bill Jones said, ‘Once you are aware of historic oppression, from that point forward, you are either condoning it or you are ending it.’ Now that we know we can do this, we have no excuse. We are capable of putting Unitarian Universalism on the road to a different future, to answer questions like, Are we going to be reactive or prophetic?”

Gini's words continue to echo with me:

She concluded with this benediction by Rev. Nancy Shaffer:

Delegates gave Gini a standing ovation -- standing, and still standing, on the side of love.

Posted by Meredith Garmon at 14:42