Gossip, Agency, and the Lesson of Communes

The Origin of Morality

Religion has always been intimately connected with the promulgation of moral systems. In a context of competition between bands and tribes, the survival of a complexly social primate species depends on communicable rules that function to keep most of the members more-or-less in line. If too many members of a group are lying, cheating, stealing, or murdering within the group, then that group won't be unified and able to defeat the pack on the other side of the hill.

These selective pressures turned our ancestors into the sorts of beings with a facility for learning moral rules. Language allowed us to keep tabs on more and more of each other, which let us maintain a larger group, which allowed a more cohesive and larger fighting force and a better chance of defeating rival groups. 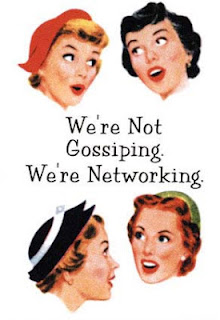 Our ancestors learned a technique that we readily recognize and still use, though sometimes we say we don't like it: we call it gossip. That is, our ancestors met in small groups to monitor others' behavior and moralize about it. Gossip emerged among early humans because it worked. Through gossip, a group kept track of who was trustworthy, reinforced both the social ties of the gossipers and the moral rules of the tribe. There are good reproductive reasons why we humans are attracted to gossip and gossiping. It’s a part of the system of maintaining the social order.

There is, however, a limit to how far gossip can go. Researchers find that moral rules reinforced through gossip can maintain unity up to about 150 members. Larger groups need to be held together with something else. That's where religion comes in.

Religion, argues William Irons, anthropologist at Northwestern, facilitates cooperation among a group's members by serving to reinforce commitments to each other in a recognizable way. Participating in a group's rituals psychologically reinforces your actual commitment to the group and also lets the group know you're committed to them.


“participation in a ritual tends to alter individuals' brain states and to cause them to feel emotions of identity with a group more strongly and to hold this feeling more firmly in memory.” (The Spectrum of Ritual, 1979)

Reciting and listening to sacred stories works the same way.


“People who frequently participate together in religious rituals achieve a feeling of community that enhances their ability to cooperate and avoid conflict. Even though they may not be conscious of it, they also are able to monitor one another for the sincerity of their commitment, thus making participation in religious rituals a credible signal of commitment.” (William Irons, 2001, 364)

That's where religion comes from.


Why Communes Last or Don’t 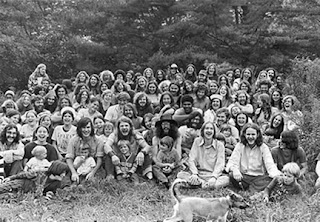 The power of religion to develop and maintain group loyalty is illustrated in our experiments with communes in the 19th and 20th centuries. Richard Stosis studied communities that hold property in common. If you were a young adult in the 1960s, you may have some direct experience of this: communes often do not last long. They tend to fall apart because the level of trust and cooperation required is just so difficult to maintain.

The previous sentence characterized religion as composed of two elements: shared rituals and shared sacred stories. There's a third element of primal religion. If I asked you to guess it, you might guess belief in supernatural beings and forces. That's close, but I don't think that's the best way to put it. Early peoples  didn't have the distinction that has come to be so central to modern religious thinking: the distinction between an account of reality that includes "the supernatural" and one that denies "anything supernatural." Modern people are divided on whether there are any supernatural forces or entities, but both sides tacitly regard the natural-supernatural distinction as coherent. The two sides each assume they know what they are disagreeing about. Those who affirm as well as those who deny the existence of "the supernatural" assume that "supernatural" is a meaningful, coherent concept (or else why would anyone bother either to deny or to affirm that there was such a thing?) Early humans made no such conceptual distinction between "natural" and "supernatural." It is, then, a kind of conceptual anachronism for us to speak of the role of "supernatural beings" in the religion of early humans: they didn't have a concept of "supernatural" as distinct from "natural."

While "supernatural" is a vague and probably ultimately incoherent concept, I think "agency" will do the job we want. Rather than saying, "they believed in supernatural forces and entities," let us say early humans attributed a stronger sense of agency than most modern humans do to trees, rivers, mountains, animals, sky, and, perhaps, "reality as a whole." They understood these features of their world to have beliefs, desires, and various means for effecting their desires. Trees and rocks and sky, in their understanding, were watching them. This probably triggered the same parts of the brain that account for gossip's effectiveness. Feeling watched made them more likely to "stay in line." Early human "religion" (what we would call "religion," and which, for them, was not separable from the kind of knowledge we'd call "factual," "empirical," or "scientific") provided the feeling of a relationship of accountability even when no other humans were around.

Why, then, do communes based on "religious ideals" last much longer than those based on "secular ideology"? What do a group of Christians or Muslims have that a group of Marxists or Skinnerian Behaviorists don't have? The religious group has:
These are powerful factors in generating group loyalty and conformity. Religion is an adaptive strategy fostering group cohesion in larger groups than gossip can manage. After all, the very word religion is from the Latin verb, religere, meaning to bind together.

Posted by Meredith Garmon at 18:25