John's Easter Story. And Yours.

We've reviewed the Easter story in Mark and Matthew (two days ago) and in Luke (yesterday). Today we look at the Easter story in "The Gospel According to John." Mary Magdelene traveled to the tomb with two other women (Mark), with one other woman (Matthew), or with a group of at least four (Luke). In John, she comes alone. And she comes, not when the sun was up (Mark), or at dawn (Matthew, Luke), but in the pre-dawn darkness. As in Mark and Luke, she arrives to find the stone rolled away and the tomb empty. This time there’s no guy in white, or two guys in white, or an angel. Nobody. And no body.

Mary goes back and reports to Simon Peter and another disciple:

Then Simon Peter and the other disciple leave.


“But Mary stood weeping outside the tomb. As she wept, she bent over to look into the tomb; and she saw two angels in white, sitting where the body of Jesus had been lying.” (20: 11-12)

The angels ask, “Why are you weeping?” Mary answers that “They have taken my Lord, I don’t know where.” Then she turns around and sees Jesus, but doesn’t recognize him: 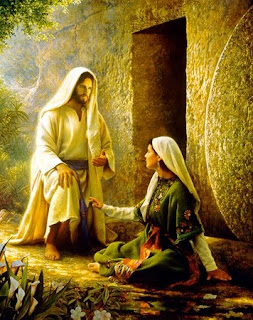 “’Jesus said to her, “Woman, why are you weeping? Whom are you looking for?’
Supposing him to be the gardener, she said to him, ‘Sir, if you have carried him away, tell me where you have laid him, and I will take him away.’
Jesus said to her, ‘Mary!’
She turned and said to him in Hebrew, ‘Rabbouni!’
Jesus said to her, ‘Do not hold on to me, because I have not yet ascended to the Father. But go to my brothers and say to them, “I am ascending to my Father and your Father.”’” (20: 15-17)

Later that evening, Jesus appears to the other disciples:

Jesus shows up again a week later where the disciples are gathered:

“Although the doors were shut, Jesus came and stood among them and said, ‘Peace be with you,’ Then he said to Thomas, ‘Put your finger here and see my hands. Reach out your hand and put it in my side. Do not doubt but believe.” (20: 26-27)

The John story has a surreal, dreamlike quality quite different from the other three. In the surreal logic of John, bodies reanimate, yet wounds remain unhealed. Apparitions say, “Peace be with you.” The ghostly Jesus asks not to be touched, then convinces “doubting Thomas” by letting him touch the wounds. It is a dreamlike realm, unconcerned with persecution from worldly powers.

The resurrection is about you. Mark, Matthew, Luke, and John give four different stories: four metaphors for what each of us encounters. In these metaphors, Mary Magdalene is you. Jesus is also you. Jesus is the part of you that you thought was dead. You mourn its loss. But these stories are here to tell you: it’s not dead.

Easter is the time for soul-searching. Go, as Mary, and look. Look to find your self.

What part of you seemingly has died and is laid in a tomb? Go and look.

Are you stuck in a deadening job? Does it seem that the part of you that yearns for creative, rewarding contribution to the world lies dead? Go and look.

Are you stuck in a dysfunctional relationship? The part of you that would dance in celebration of love and connection and intimate play seems like a cold and motionless corpse? Go and look. What part of you has been persecuted, battered, humiliated? What part of you with its dying words asked, “Why have you forsaken me?” Arise on the morning of a new day, and go and look.

Posted by Meredith Garmon at 08:42