What Is The Sound of An Arrow Hitting Oatmeal?


A Zen devotee named Liang asked Qinshan, "What is it when one single arrow breaks through three barriers?"
Qinshan said, "Drive out the master from behind the barriers, so that I may see him."
Liang said, "If so, I will acknowledge my failure and correct it."
Qinshan said, "Till when do you want to wait?"
Liang said, "I made a nice shot, but no one could see the arrow," and he went out.
Qinshan said, "Wait, sir."
Liang turned his head.
Qinshan grasped him and said, "Let's put aside the story of the arrow which breaks through three barriers. Just shoot an arrow for me, so that I may see it."
Liang hesitated.
Qinshan hit him seven times with a stick and said, "I will allow this fellow to keep puzzling for thirty years." 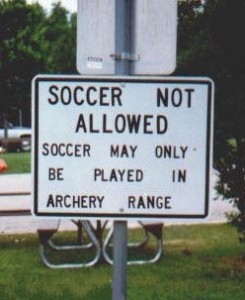 What is it when . . . ?
Please. What is anything ever?
Listen. Once Master and I went to the Archery Range Cafe.
Our orders placed, we sat.
Trying to be funny and true, I said, "My shot was perfect; the target was misplaced."
Master asked, "Misplaced because you missed it or because you hit it?"
"The archer or the target?"
"Hit either one for me on your next shot," said Master.
"If you've shot one you've shot 'em all," I said, imagining how that would be as the last word.
"Sure," said Master. "So shoot one."
"Our food is here," I said.
"Who had the thin gruel?" said the server.
"Let's eat," said Master.

Next: The Old In and Out

Posted by Meredith Garmon at 10:50