Your Brain Is Out to Get You 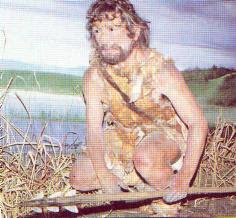 “Imagine a Stone Age hunter who falls asleep by the glowing embers of a campfire one night. When he opens his eyes in the morning, he is lying on a sidewalk in Times Square.” (Daniel Gardner)

That’s basically our situation. We inherit a brain that evolved to work well for the Stone Age. Our brains were made for days that were mostly uneventful. Without romanticizing the hunter-gathering lifestyle, it’s fair to say that prolonged portions of their days were bucolic and placid. Then, when something did need to grab attention – a charging mastodon, a raid from an enemy tribe – or a dangerous place where some sort of threat might lurk – our brains had good systems for grabbing our attention. Adrenaline and cortisol, the stress hormones, kicked up, and gave us the energy for fight or flight without which we would not have survived as a species.

It was a system that worked very well for the way our ancient ancestors lived. It works less well for you and me, as our blinking and confused hunter-gatherer brains try to cope with our world of computers, and cell phones, and GPSs, and everyone seems to want everything, and they want it from you, and they wanted it yesterday.

I think the last time I actually needed either to fight or to run away was in 7th grade. Yet I’ve got this biology that gears me up for physical aggression or speedy evasion whenever I’m in traffic and someone cuts me off, or I get a certain kind of email, or I hear certain political opinions expressed on the news.

Our world has gotten faster-paced. Knowing that fear grabs our attention, the news, politicians, and advertisers unleash a barrage of things to make us scared. If we don’t take some intentional action to lower our stress response, it’s easy in this modern world for the stress response to be almost constant. Chronic stress is a threat to our health in a variety of ways.

That’s just one way our brains are out to get us. A second way our brains are out to get us, or at least confuse us, is that our brains are divided into a left side, which is very analytic, and breaks things down into parts, and a right side, which is holistic. They don’t automatically integrate very well. Which side is really more reliable? The left side is good at analyzing detail and catching things the right brain would miss. But when it comes to overall things like face recognition, that’s really hard for left brain to do: “Well, the eyes are just so, and the nose is like that, and the mouth has that shape . . . it must be friend, Bill.” That’s how left brain would have to do it, and it would be really hard. Right brain has the holistic sense, and it just instantly knows, “that’s Bill.”

Even a super-high-powered left-brain-type system, like a souped-up computer, can’t keep up with the accuracy of holistic right brain in some ways. Andrew Newberg gives an example:


“Does holistic thinking offer a more accurate or integrated view of the world? A few years ago, our radiology staff had a chance to test this hypothesis in a very particular way. We compared the differences between human and computer evaluations of brain scans, thinking that a computer might more accurately quantify which parts of the brain were not functioning normally, leading to a more precise diagnosis. To our surprise, humans, using their intuitive holistic skills, did slightly better than the computer, most likely because we derive information from various patterns in the entire scan that help us in our diagnosis.” (Why We Believe What We Believe, 2006, 94)

Because your left brain has the language, it likes to tell you that it’s perceiving reality – but it’s more fabricating it that perceiving it. Sometimes left and right brain provide helpful “reality checks” for each other. Generally, though, they're each off in their separate worlds, from which each occasionally lobs a bomb at the other.

Posted by Meredith Garmon at 08:13