I Meant to Do That

Our brains mislead us in a variety of ways. Perhaps the chief deception is the illusion that I'm in charge: that there such a thing as an “I”, and that I am in charge of making the decisions about what I do from one moment to the next.

My conscious brain makes up a story about what I'm doing. Key features of that story are that I am doing what I do as the result of a rational intention and deliberate decision. In fact, the vast majority of the things any of us do during a typical day were already decided before we knew we were going to do them. I'm not saying they were decided by fate, or extraterrestrial beings using mind-control rays. I mean that the unconscious brain took in the data, decided what to do, and put into motion our action. Conscious awareness actually trails the process by a few split-seconds.

Yes, brain studies have repeatedly confirmed that motor commands come from the brain before there is awareness of intention to move. My conscious awareness notices what I have already begun doing, and busily fabricates a story about how that action is exactly what I meant to do.

Benjamin Libet had subjects watch a clock and, at a time of their own choosing, move their right hand, reporting at what position the clock hand was when they first ‘felt the urge’ to move their hand. Electoencephalogram readings on the scalp showed that the ‘urge’ to move their hand occurred about .2 seconds prior to muscle movement. But the electrical activity in the brain regions that created the motion began at least one second before hand movement! Thus, brain activity is the cause of conscious intention and not the other way round. 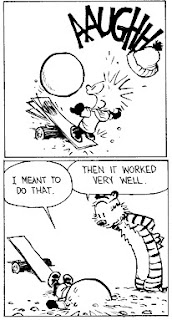 Our conscious intentions occur too late to be the causes of our bodily expressions. In one experiment, electrodes in an arm muscle could make the muscle contract and make the arm move. The arm motion was entirely involuntary – the experimenter decided when to trigger the electrodes to make the subject’s arm move. Yet subjects often reported that they had, in fact, meant to move their arm. They were quite ingenious – and sincere -- in making up an explanation for why they would have wanted to move it – “it was starting to stick to the arm rest” or some such.

Those explanations were made up after the fact.

Have you ever done something unintentionally – like you made an unintentional pun, or you dollopped a bit more butter into the dish you were preparing than you would have thought a moment before that you would intend to. You may have noticed in yourself that impulse to believe that you meant to do that, or you intended that pun.

More likely, you’ll fool yourself, but a friend won’t be fooled. You’ll be: “I meant to do that.”

Have you ever had that happen?

Video: Pee Wee Herman "meant to do that"

Those are only the most blatant cases of what is actually going on all the time. Instead of being the cause of most of our day-to-day actions, the conscious feeling of intention or urge to act is an immediate by-product of the activity in the motor areas of the brain that actually instructed the movement itself. Conscious awareness trails the action, making up a story about it.

There are conditions under which conscious awareness – the story we construct about who we are and why we’re here – can feed back into the less conscious parts of the brain and can influence results. Under conditions of armchair reflection – when we’re really sitting back and thinking things through – our conscious story can affect what we later do. But for most of our ordinary, day-to-day movements and actions, the story of an intending self is an illusion.

Posted by Meredith Garmon at 10:15