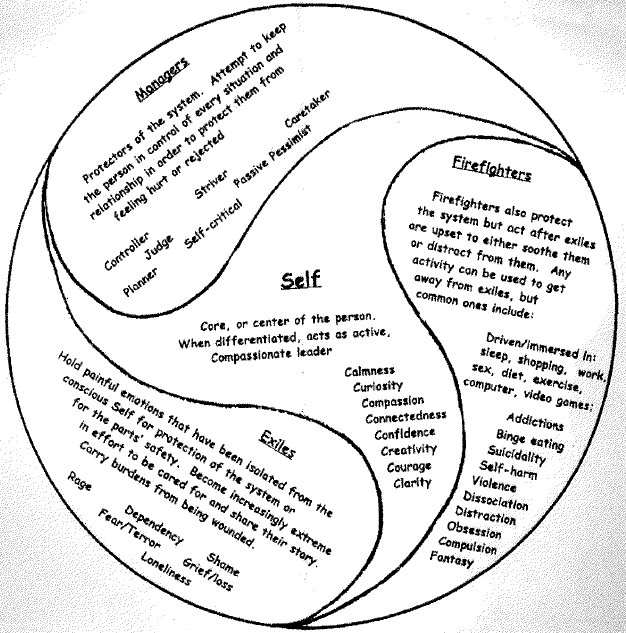 How do we connect with the part of ourselves that is quietly watching and that holds our best wisdom? There are many voices inside each of us clamoring, and sending conflicting messages, many inner personae vying to be heard.

For example, on psychologist Richard Schwartz’s model, the primary inner personae are The Manager, The Firefighter, and any number of Exiles. The Manager’s job is keep you functional and safe. It does this by controlling as much of your inner and outer world as it can.

Unruly emotions are a threat to the manager’s aim of order and protection. The manager tries to keep my vulnerable, needy parts locked in inner closets. Anything that disrupts the manager’s need for control is exiled. When an exile breaks out, bringing feelings of fear or anger, humiliation or shame, then The Firefighter rushes in to put out the fire.

For example, one inner voice may be telling you you’re hopeless. “You have no chance of success.” This voice is trying to protect you from the shame of failure – “so don’t even try,” it says. The Manager wants to push you to achieve things. The Manager gets mad at the hopelessness, wants to exile it. The pattern that may emerge is one of anger of one part of you against another, followed sometimes by partial, temporary success at exiling the hopelessness and shame, and followed other times by failure to exile the shame, in which case the Firefighter comes in with its choice of dousing substance: alcohol, perhaps, or maybe four straight hours of Gilligan’s Island reruns. Ugh.

There is a self underneath these inner voices. The self is an active healing presence that is able to appreciate all the voices for the important and needed work they do. By connecting with the voices and by appreciating them, the self gives the various parts the space to relax and recognize when their work isn’t needed.

Like, right now, I’m not needing the work that my immune system is determined to do. You see, this year, for what I think is the first time, I have joined the ranks of allergy sufferers. For the last 5 or 6 weeks, the Gainesville air has been pollen drenched, and it’s a problem for me this time as it never was before. My immune system, which has for years regarded that pollen as harmless, has decided this year that pollen is the enemy and it must be attacked. So I am suffering, not from the pollen, which, in itself, is as benign as it ever was, but from my immune system’s reactivity. I would like to have a word with my immune system. A kindly word, to be sure. I would like to tell it how much I appreciate how hard it works to fight off diseases and keep me healthy. “Thank you, thank you, immune system,” I would like to say. And when I was sure my immune system was feeling the gratitude and appreciation, I would say, “Now with this pollen stuff, I’m going to ask you to step down. I definitely need you, but not in my sinuses right now. OK? Would you be willing to just relax about the pollen?”

Unfortunately, I can’t get through verbally to my immune system – I have to send in pseudoephedrine, which probably isn’t nearly as appreciative as I would want to be. With my inner voices, though, I can talk. I can reassure a given inner persona that it is appreciated, that I don’t want to kill it, that I’m grateful for the work it does, but just for right now I’d like it to stand down. With the standing down of the voices that shout, I can connect with the self, quiet, wise, caring and compassionate.

Posted by Meredith Garmon at 06:18