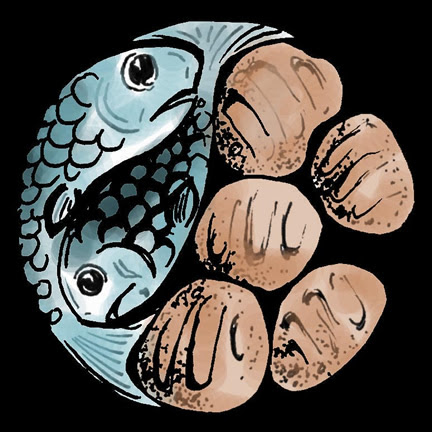 The previous Lake Chalice mentioned the “miracle story” of the loaves and fishes – the only miracle story or parable that appears in all four gospels. Here’s the version from the oldest of the four, the Gospel of Mark:


‘The apostles gathered around Jesus, and told him all that they had done and taught. He said to them, “Come away to a deserted place all by yourselves and rest a while.” For many were coming and going, and they had no leisure even to eat. And they went away in the boat to a deserted place by themselves. Now many saw them going and recognized them, and they hurried there on foot from all the towns and arrived ahead of them. As he went ashore, he saw a great crowd; and he had compassion for them, because they were like sheep without a shepherd; and he began to teach them many things. When it grew late, his disciples came to him and said, “This is a deserted place, and the hour is now very late; send them away so that they may go into the surrounding country and villages and buy something for themselves to eat.”
But he answered them, “You give them something to eat.” They said to him, “Are we to go and buy two hundred denarii worth of bread, and give it to them to eat?” And he said to them, “How many loaves have you? Go and see.” When they had found out, they said, “Five, and two fish.” Then [Jesus] ordered them to get all the people to sit down in groups on the green grass. So they sat down in groups of hundreds and of fifties. Taking the five loaves and the two fish, he looked up to heaven, and blessed and broke the loaves, and gave them to his disciples to set before the people; and he divided the two fish among them all. And all ate and were filled. And they took up twelve baskets full of broken pieces and of the fish. Those who had eaten the loaves numbered five thousand…’ (Mark 6:30-42)

Five loaves and two fish. Five thousand were fed. What happened? The story may, of course, have been fabricated from whole cloth, but that hardly matters. What is it a story of? What does it teach us? What is its poetic, rather than "literal-factual," meaning?

The great Unitarian Rev. Theodore Parker notwithstanding, I want to say there was a miracle there – even if there wasn’t . . . what? It gets difficult to say what it wasn’t. Some folks like to say it wasn’t “supernatural,” but that word has so many conflicting meanings, connotations, and associations that I think it is useless. Theologian Daphne Hampson has a phrase that may be helpful here:


“an interruption of the causal nexus of history and nature.” (Hampson, After Christianity, 1996, 12)

The miracle did interrupt something, though. It interrupted the mind’s chatter about its needs and fears. It interrupted obliviousness and allowed people to notice wonder, beauty, and the abundance that life presents in each moment. It’s a story that still has the power to interrupt the ego’s defense mechanisms and call us to neighborliness – call us to expand our circle.