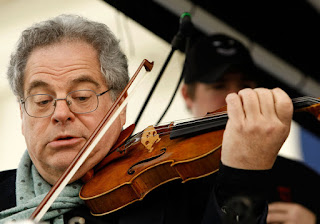 What happens with all that practice? We know that better today than we ever have. Brain scans show certain clumps of neurons getting larger with practice. Violinists show

– because the left hand has to finger strings very precisely and rapidly.

If you put up a scan of Itzhak Perlman's brain and my brain, side-by-side, someone who knows what to look for will be able to tell which brain belongs to a highly trained musician, and which brain can strum a few chords on a guitar. All that practice, practice, practice actually builds up neurons.

I’ve moved toward a greater integration. Obviously, I have some areas for further growth -- and always will. But if you’d known my brain 15 years ago . . . well!

I was raised by solid rationalist, humanist parents. They were academics: Mom’s field was chemistry, Dad’s was English. His specialty was 18th-century British literature: the age of reason. So for me the arts and the sciences all pointed to reason. I was their first born. Wanted to please, and lead in the values my parents represented. Was on my high school debate team -- Georgia state champion. Went on to go into the family business: college teaching. I lived in my head, and trusted thinking more than feelings. Especially under stress, I trusted intellectual analysis – the strength of my arguments -- to get me through.

As in many mythic narratives of the spirit journey, the breaking up of hubris and the beginning of wisdom requires a descent into failure. Mine came when I didn’t get tenure as a philosophy professor. Despite approval from the faculty committees reviewing my performance, the President’s office cited institutional need – the slot I’d been hired into had essentially gotten filled when, in my third year, the academic dean gave up deaning and returned to full-time teaching. His field just happened to be philosophy, and the small school and tiny philosophy department didn’t need another full-time philosopher – a fact for which I’m deeply grateful . . . now.

Posted by Meredith Garmon at 10:23