We Have Religion Because We Had War

Religion gives us a sense of US-ness. The dark side is that it also gives us a sense of THEM-ness – a feeling that those who don’t participate with us in our rituals and story-telling are different, are other, and dangerous. In other words: We have religion because we had war.

War, whether you're attacking or defending, places a premium on group cohesion, and “religion” is our name for the rituals and sacred story telling that produced what was needed. War! (Huh!) Church! (Huh!) What are they good for? Each other, apparently.

Thus, human history is filled with wars over religion. This fact once seemed to me, as perhaps to you, strangely and deeply perverse. Why do people have wars over religion, when the religion on both sides teaches peace? In the light of recent thinking in evolutionary archeology and psychology, religious warfare is exactly what we would expect. It's hardly surprising that an adaptation for succeeding in war would play a role in prompting us to go to war. 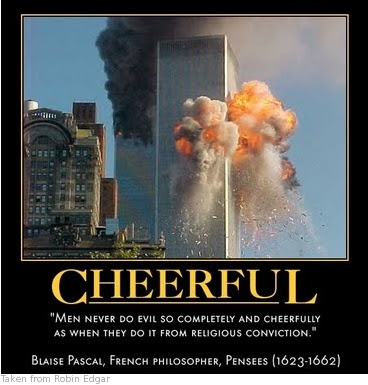 Faith community meets real human needs. It feeds people spiritually. But people can be fed by way of fortifying them for destructive activity. We see that in the active religiosity of some terrorists. In fact, what goes by the name of religion these days is more often unhealthy than healthy.

A recent study in The Journal of Religion and Society did a large-scale cross-cultural comparative analysis, taking into account key indicators of societal well-being for 800 million people in the U.S., Japan, and western Europe. The study found that higher levels of religiosity correlated with lower levels of social well-being. The U.S., where church attendance is high, has had more school shootings than all of Europe and Japan combined. The study found:


“in general, higher rates of belief in and worship of a creator correlate with higher rates of homicide, juvenile and early adult mortality, STD infection rates, teen pregnancy, and abortion. The most theistic prosperous democracy, the U.S., is . . . almost always the most dysfunctional of the developing democracies, sometimes spectacularly so. The view of the U.S. as a ‘shining city on the hill’ to the rest of the world is falsified when it comes to basic measures of societal health.” (Gregory S. Paul, “Cross-National Correlations of Quantifiable Societal Health with Popular Religiosity and Secularism in the Prosperous Democracies,” The Journal of Religion and Society, 7, 2005. View complete article: click here.)


“...Spending on health care [in the US] is much higher as a portion of the GDP and per capita, by a factor of a third to two or more, than in any other developing democracy. The U.S. is therefore the least efficient western nation in terms of converting wealth into cultural and physical health.” (Gregory Paul)

Religion reinforces a moral code, binds members into community through ritual and story, and triggers our brains to perceive a transcendent, interconnected whole beyond and more deeply satisfying than the concerns of personality and ego. But sometimes it does so in a way that is counter-productive to other values.

What the researchers in this study counted as “religiosity” is apparently not the form of faith community that the 21st century needs. We do need to meet those human needs for moral and cohesive community, for interconnection and transcendence. But the Protestant or Catholic church, in the forms that were typical through the 20th century, appears not to be the best way to do it.

Posted by Meredith Garmon at 18:07