A few days ago, Lake Chalice posted this graph:

The graph shows how one of the effects of rising inequality of income is a polarizing of our political system. Or vice-versa. "House polarization" is a measure of the internal homogeneity (low diversity of viewpoint) among House Democrats and among House Republicans, and the ideological gap between an average House Democrat and an average House Republican.

The Gini Index (or Gini coefficient) was developed by the Italian statistician and sociologist, Corrado Gini in 1912. It measures equality or inequality of distribution. The Gini coefficient ranges from 0 (where every person has exactly the same income) to 1 (where one person has all the income there is, and everyone else gets none).

This week's defeat of six-term Indiana Republican Senator Richard Lugar certainly illustrates the trend toward polarization. Lugar and Sen. Olympia Snowe of Maine were dealmakers within the Republican party, willing to work with Democrats to compromise rather than effect gridlock by standing firm on ideological principles. Snowe is already gone -- and now Lugar has been ousted by a tea-party hardliner. Our political polarization continues to worsen.


If something like the financial crisis of 2008 had occurred in, say, 1971,...Washington would probably have responded fairly effectively. There would have been a broad bipartisan consensus in favor of strong action, and there would also have been wide agreement about what kind of action was needed. But that was then. Today, Washington is marked by a combination of bitter partisanship and intellectual confusion — and both are, I would argue, largely the result of extreme income inequality.

Growing polarization makes it increasingly difficult for either side to see a distinction between the national interest and its own partisan triumph -- though Krugman finds that it is the Republicans who have become especially unable to see such a distinction.


For the past century, political polarization has closely tracked income inequality, and there’s every reason to believe that the relationship is causal. Specifically, money buys power, and the increasing wealth of a tiny minority has effectively bought the allegiance of one of our two major political parties, in the process destroying any prospect for cooperation.

Our country has managed to break out of this vicious cycle before. The graph above starts in 1947. Let's look further back to 1879: 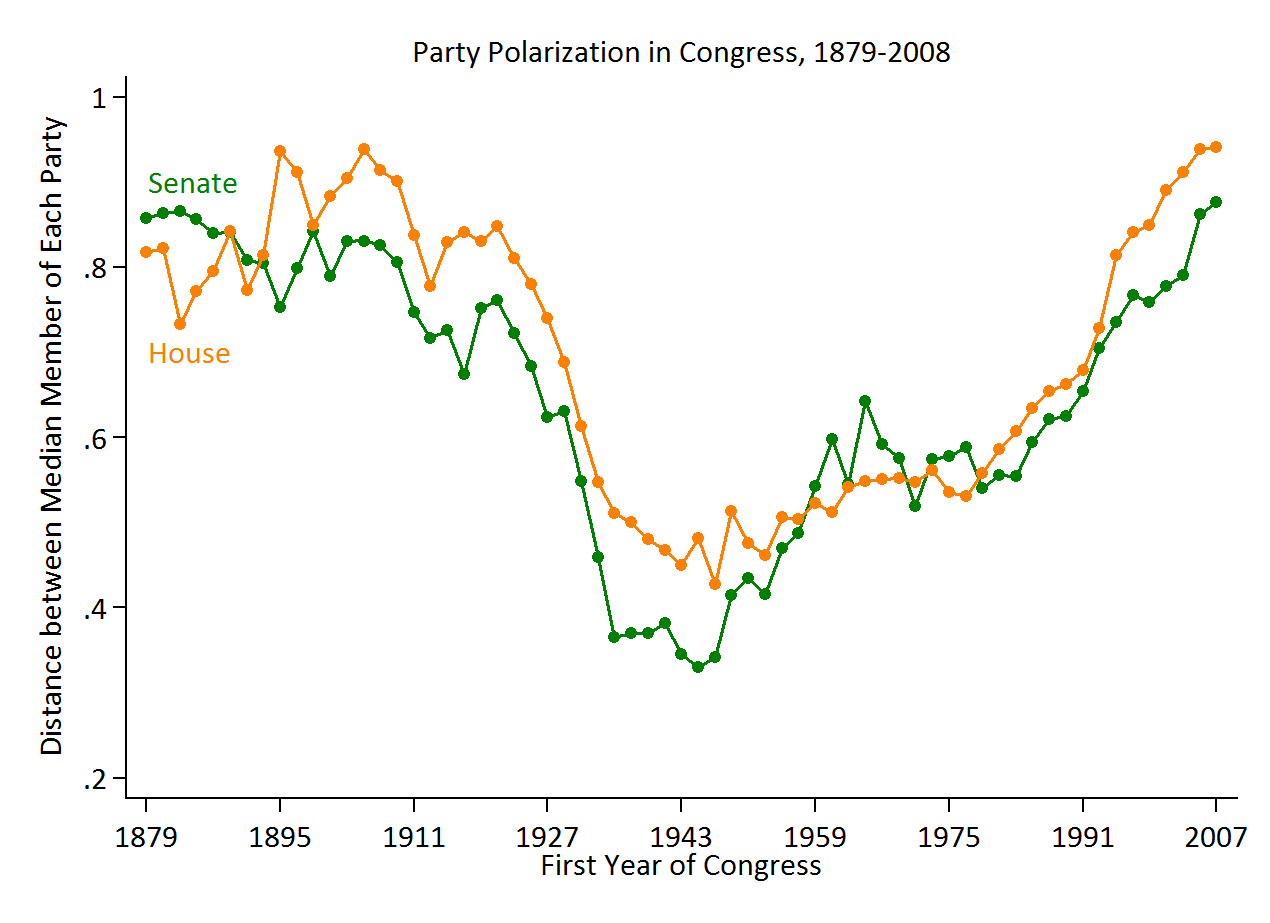 We have had high levels of polarization before. From 1879 until the mid-1920s political polarization was about where it is now -- and income inequality was similarly high then. How did we break out of the vicious cycle before?

Let's remember our history. The constitutional amendment allowing a federal income tax was passed in 1916. Oh, and look -- that's about when the trend toward decreased polarization began. Factors that plausibly facilitated the continuation of that trend include the crash of 1929 and ensuing Great Depression, the creation of Social Security and a slew of other safety net programs under FDR, and World War II.

With a return to the income tax rates we had in the 50s and 60s and renewed commitment to social safety net programs, maybe this time we can skip the need for a World War. But, dear and gentle reader, we will not get those policy changes without a spiritual shift toward greater connectedness with our neighbors.

To break the vicious cycle of domestic abuse generation after generation requires intentional work at counseling and creation of social structures of accountability. To break the vicious cycle whereby inequality fosters polarization which fosters further inequality will require a similar intervention of intentional creation of habits of building connection, and being accountable to one another for doing so.

Posted by Meredith Garmon at 18:19