The apple doesn’t fall far from the tree.
– German Proverb

Newton himself often told the story that he was inspired to formulate his theory of gravitation by watching the fall of an apple from a tree.
– “Isaac Newton,” Wikipedia

My mother was, and still is at the time of this writing, a scientist. Since her research was at the boundary between chemistry and physics, her teaching career has included some years on the chemistry faculty, and other years on the physics faculty. In 1960, women scientists, and, in particular, mom scientists, were still a novelty. The Richmond, Virginia Times-Dispatch that year ran a human interest story about a mom and her little boy: me, age 15 months.

Along with the brief article the paper ran a photo of Mom, Dad, me, and her electron microscope. The captions says: "Gerald Garmon [Dad], and Steven [my first name; "Meredith" is my middle name] pick mother up at her office. Electron Microscope Mrs. Garmon uses is much bigger than Steven."

My perch is not steady. An electron microscope is not firm grounding. But Dad's holding me, and I am holding on to the microscope. In my short pants and toddler shoes, I'm looking at Mom, and she's looking at me, while she has a finger on the control panel.

Mom looked for truth, in the way that scientists do. With the then-high-tech electron microscope, she looked for tiny, tiny truth to contribute to a grand edifice. She investigated the structure of nickel electrodeposits on copper monocrystals. 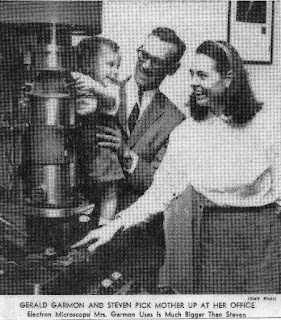 Mom wanted to know, to understand – and not just for her own sake. She was called – called by the cosmos, ancient and infinite, immediate and infinitesimal – to toil in orchards where Newton and so many other scientists had plucked fruits of empirical knowledge. Her life has been dedicated to service to future generations, to participation in the processes of unfolding truth so that those who come after will understand this world better than our brief lifespans will allow to us.

As the years rolled by, I grew, a product of my times (see Odyssey, part 1), my parents, and my own predispositions. I went not into science, but into philosophy. For several years of young adulthood my primary interest was in philosophy of science. I explored questions about how science works, what legitimates its claims. Does it discover truth, or invent fictions of ever-increasing convenience? And how would we know?

Scientists, like the rest of us, are apes descended from apes, built to be social animals, learning from each other as we must, and learning biases and prejudices as we do. The direction of science is set by its leaders; they become leaders through some mix of social skills and charisma as well as scientific brilliance. Is this a regrettable condition that we should strive to overcome as much as we can? Or does the scientific enterprise in some essential way depend on the very humanity that "skews" it? (If so, what would "unskewed" even mean?)

Our brains are flukes of evolution. Animal brains are selected for ability to do three basic things: find food, avoid becoming food, and find a mate. Primate brains have the special challenge to do these three things in a fantastically complicated social context that requires, on the one hand, intricate cooperation, and on the other hand, complex intrigue and competition. How is it that a brain thus produced can do theoretical physics? Can build, and peer through electron microscopes? Can discover the structure of nickel electrodeposits on copper monocrystals? In doing these things, are we mirroring reality, or projecting our own brain functions upon nature? And, again, how would we know?

These are some of the philosophy of science questions that captivated my attention for some years as a graduate student. Scientists gaze in wonder through telescopes and microscopes, and I gazed in wonder at the scientists -- just as I gazed at Mom in that Times-Dispatch photo.

Many of us spend much of our adult years coming to terms with our relationship with our mothers: consciously working it out, or unconsciously playing it out. For me, this relationship involved a relationship to the entire scientific enterprise, from Isaac Newton on down.

I came to stand – the apple finally landed – upon the conclusion that science is for controlling and predicting. Mom says science seeks to explain. There are, however, many forms and functions of explanation, and the sort of explanation that is “scientific” is the sort that affords prediction and control – for prediction is the only test of an explanation in science, and ability to control is a product of ability to predict.

The powers of prediction and control, steadily growing from Newton’s time to ours are truly impressive. They made possible our modern world of cars and computers, cell phones and internet, CAT scans, artificial hearts, serotonin re-uptake inhibitors, and food production and distribution that sustain a world population orders of magnitude beyond Thomas Malthus’ wildest imaginings. Yet I want to do more than predict and control my world. I want to befriend it. Our story and picture of reality must be consistent with the well-confirmed conclusions scientists reach, yet provide also for awe and wonder, humility and gratitude, moral grounding and aesthetic bliss. The truth we need is not merely the truth about which observable causes yield which observable effects. We need also the truth that each cause is a sacrament, and each effect a revelation of divinity. We need also the truth of love and connection. We need also the truth that control, along with the ego that believes itself to be in control, is an illusion.

Email ThisBlogThis!Share to TwitterShare to FacebookShare to Pinterest
Labels: autobiography