The previous Lake Chalice suggested that if human beings weren’t here, chimpanzees or bonobos could, and probably would, move into our niche and do about as well, and about as poorly, as we humans are doing.

Of course, the chimps are already so much like us. What if all the apes, or even all the primates, or, heck, let’s say all the mammals suddenly disappeared from earth? High levels of intelligence – that is, behavioral flexibility made possible by larger brain-to-body-size ratios – would probably emerge again.


“Toward the end of the age of dinosaurs – just before they ran into their epoch ending piece of bad luck [when a comet or asteroid struck earth and caused massive climate change that wiped them out] – a number of advanced species had appeared, with brain-to-body ratios as high as those of some modern mammals. It now looks as if some of the smarter dinosaurs could stand up and use grasping forepaws. And some may have been warm-blooded and nurtured their young. Who knows? Give them another 100 million years and their offspring might be riding on jumbo jets” (Wright, Nonzero, 293)

– and arguing over whether to teach evolution in their schools. 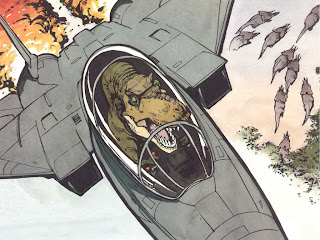 Or maybe they wouldn’t. How any given species will go is a highly contingent matter. But certain properties – like eyesight or grasping ability or behavioral flexibility – are very likely to sooner or later recur somewhere. The genetic specifics of homo sapiens appears to have occurred “by the luck of the draw” -- a highly unlikely fluke. Yet a level of intelligence – that is, behavioral flexibility – comparable to what humans have is no fluke.

Try holding that awareness in your consciousness throughout your day. Not only you and I, but our species, is neither essential nor necessary. Remembering this puts the ego's preoccupations in a wider context, and invites us into that wider perspective. Cultivating continual remembrance of non-necessity is thus a spiritual practice.

The story herein sketched is supported by the best science, as I understand it. Responding to that story on the spiritual level evokes simultaneously a pride and a humility: we are the universe playing itself out – the grand product of the grandest possible creator. At the same time, if we humans weren’t around, the complexity and flexibility of our intellect would simply appear elsewhere.

It is a story of nature red in tooth and claw – ruthless, heartless competition forming the conditions for gradually increasing cooperation to form more complex, more beautiful, coalitions of cells, and then coalitions of individuals, to produce wonders that never would have appeared had life been easy. The moral of the story is the ultimate moral of all spiritual stories: the basic goodness of reality, the fundamental beauty of the whole.

It’s a story of interconnection – for there is ultimately nothing that separates us from the other animals, other life, or from the earth itself. A little more of this, a little less of that – no barriers.

It’s a story that evokes depths of gratitude; wonder and awe.

It’s a story of faith, because it tells us there are forces out there that we can trust – that we don’t have to carry all the world’s burdens ourselves. There are much more powerful forces at work out there, and they are slowly, slowly, pushing for ever-greater levels of cooperation and harmony. We are borne aloft by that grace.

Yes, it’s a jungle out there. For that we can be grateful. We -- whether "we" means homo sapiens or "we" means some species, or a machine built by some species, with the great behavioral flexibility necessary for highly abstract symbolic language and elaborate structures and mechanisms of social organization -- wouldn’t be here if it weren’t.

* * *
This is part 7 of 7 of "Eschatology: Evolution's Arrow"
Next: "Postscript: Explaining 'Explaining'"
Previous: Part 6: "On Being a Nash Rambler"
Beginning: Part 1: "Science, Religion, and a Bud Vase"

Posted by Meredith Garmon at 11:47