The emergence of religion was a vital functional adaptation that met necessary human needs. We need community, connection, and contexts of accountability, all bound and held together by ritual (because the mind believes and better remembers what it sees the body doing) and narratives of purpose and meaning. We need faith community.

Our world, however, is no longer the one for which religion was originally such a crucial adaptation. Many of us belong in various ways to a number of "tribes" -- and our survival does not depend on cohesive loyalty with just one. High levels of religiosity now correlate with low levels of social health and well-being by such measures as homicides, juvenile and early adult mortality, STD rates, teen pregnancies, abortions, and imprisonment rates.


“The European Dream emphasizes community relationships over individual autonomy, cultural diversity over assimilation, quality of life over the accumulation of wealth, sustainable development over unlimited material growth, deep play over unrelenting toil, universal human rights and the rights of nature over property rights, and global cooperation over the unilateral exercise of power.” (Rifkin 3)

Rifkin says the European dream is to


“connect the human race to a new shared story, clothed in the garb of universal human rights and the intrinsic rights of nature – what we call a global consciousness.... What becomes important in the new European vision of the future is personal transformation rather than individual material accumulation. The new dream is focused not on amassing wealth but, rather, on elevating the human spirit. The European Dream seeks to expand human empathy, not territory...For Europeans, freedom is not found in autonomy but in embeddedness. To be free is to have access to a myriad of interdependent relationships with others.” (7, 8, 13) 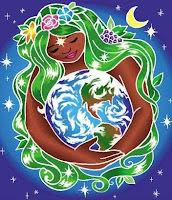 Rifkin's language is ecospiritual. He speaks of re-participating in the body of nature, of the Earth as an organism consisting of interdependent relationships. This is spiritual, theological talk.


“We are on the cusp of the third great stage in human consciousness – the stage where we make a self-aware choice to re-participate with the body of nature....European intellectuals, scientists, and visionaries...increasingly view the world as an indivisible living entity deserving of respect and care....The Earth is a living organism made up of interdependent relationships and...we each survive and flourish by stewarding the larger communities of which we are a part. The solution to our dilemma lies in integrating the life instinct and death instinct in a new unity....We can't really begin to live until we first accept the fact that one day we will die. How do we come to terms with our own death and make the choice to live? By making a self-aware decision to leave the death instinct behind, to no longer seek mastery, control, or domination over nature, including human nature, as a means of fending off death. Instead, accept death as part of life and make a choice to re-participate with the body of nature. Cross over from self to the other, and reunite in an empathic bond with the totality of relationships that together make up the Earth's indivisible living community....The life instinct can be rekindled only by really living life, and living life means deep participation in the life of the other that surrounds us.”

If religion is, as Unitarian Universalist minister Forest Church says, our response to the twin realities of being alive and having to die, then Rifkin is describing a religion when he speaks of learning to live by accepting the fact of death and seeking not mastery or domination, but re-participation with nature, reuniting in an empathic bond with the totality of relationships. Truly “living life,” he said, “means deep participation in the life of the other that surrounds us.”

That's what we Unitarian Universalists preach, and what we try to practice. It's our faith.

Relatively few Europeans darken the doorstep of their local church or synagogue. They form other CSOs: Civil Society Organizations: not-for-profits and non-governmental organizations. Civil society is a third socio-political force, co-equal with market commerce and government. For Europeans, it seems, CSOs are basically church.


“The civil society is the meeting place for reproducing culture in all of its various forms. It is where people engage in 'deep play' to create social capital and establish codes of conduct and behavioral norms....In a globalized economy of impersonal market forces, the civil society has become an important social refuge. It is the place where people create a sense of intimacy and trust, shared purpose and collective identity. The civil society sector is the antidote to a world increasingly defined in strictly commercial terms.” (Rifkin 234-35, 238)

Members of such a CSO share a faith. They come together in community, generating social cohesion through shared practices and stories, and maintaining a moral order of “codes of conduct and behavioral norms.” There seems to be a spiritual ethic there of re-participation with nature as a means of interconnection transcending ego and personality.

Posted by Meredith Garmon at 18:02