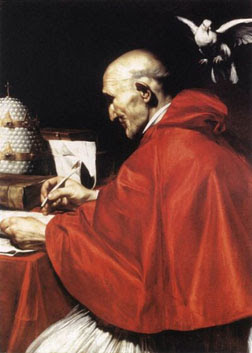 Pride was originally two of the deadly sins. The "seven deadly sins" originated as eight deadly sins when Evagrius Ponticus (b. 345) compiled his list of the deadliest sins. For Evagrius, pride was so bad that it was two deadly sins all by itself: one called pride and the other vainglory. Two centuries later Pope Gregory the First slightly revised Evagrius, combining vainglory and pride under the Latin term superbia, equivalent to the Greek hubris. Gregory’s list comes down to us as the seven deadly sins. Even though "pride" was now only one sin, it was, for Gregory, the source of all sin.

“Pride,” said Gregory is the root of all evil.” The other vices “spring from this poisonous root.”


“Every sin is a contempt of God, and every contempt of God is pride. For what is so proud as to despise God? All sin, then, is also pride....Pride encourages humans to displace God, to act on the willful denial of human limitation, to covet unjust privileges, and to glory in itself far too much.”

What Augustine thought of as displacing God, we might call choosing the delusion of separateness over the reality of interconnection and interdependence.

Over a millennium and a half later, C. S. Lewis wrote:

And from the book of Proverbs (canonical in all the Christian traditions) we read:


“Pride goes before destruction, and a haughty spirit before a fall. It is better to be of a lowly spirit among the poor than to divide the spoil with the proud.” (Prov 16: 18-19)

Sounds like there's something -- these writers called it "pride" -- to which we are highly vulnerable and from which the path of spiritual deepening guides us away. There's something -- call it "pride" -- that blocks our true flourishing; something the overcoming of which correlates with possibilities for the flowering of joyful connection and peace.
* * *
This is part 28 of "The Seven Deadlies" (Part 3 of 5 on Pride)
Next: Part 29: "Proud To Be an American?"
Previous: Part 27: "Pride, the Wrong, and Pride, the Redress"
Beginning: Part 1: "Seven and Sins"

Posted by Meredith Garmon at 12:13