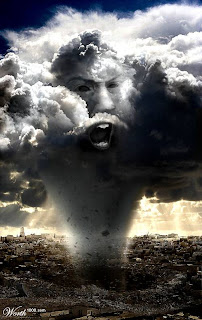 The tetragrammaton, YHWH, often pronounced Yahweh, many scholars believe is a verb derived from the Hebrew root for “to be.” In Exodus 3:


“Moses said to God, ‘When I come to the Israelites and say to them “The God of your fathers has sent me to you” and they ask me “What is His name?” what shall I say to them?’ And God said to Moses, ‘Ehyeh-Asher-Ehyeh’.”

Ehyeh Asher Ehyeh is variously translated as “I am that I am,” “I am who I am,” “I will be what I will be,” “I am who am” “I am what is,” “I am.” We are invited to conceive of reality poetically as a living being, to relate to reality in the dynamic, free-flowing way we relate to people. We are invited into a relationship with our world in which our purpose is not to control and predict but to befriend. This is challenging. Reality -- a.k.a. "that which is," "I am who am," Yahweh -- is sometimes capricious. The world sometimes treats us as if it is punishing us, as if it is angry.

This is, indeed, life. Life is not all love and sunshine.

We need stories that help us express, and thereby come to terms with, the fact that sometimes life beats us up. Even in the midst of times when the whole world seems angry at us, there is yet an ongoing, abiding relationship with the universe that feels like love. As those within the Jewish and Christian traditions tend to put it: “God’s anger is not the opposite of God’s love. Rather, God’s judgment is an expression of God’s love.” It’s a mythic way in to cultivate a capacity to affirm what is, even the hard parts – while at the same time finding in that affirmation a wellspring for kindness toward others.

Potent and powerful are these stories that tell the truth about the fact that the world is sometimes pretty stern with us, but that a relationship called love prevails, and that kindness and fairness toward others is the needful response. That’s a truth that does not fail.

At the same time let us also frankly acknowledge that Yahweh’s punitive judgments as depicted in a number of the stories of the Tanakh are bad examples of how to handle anger. There are more skillful ways of handling it.

Anger or wrath is, after all, one of the seven deadly sins. Along with gluttony, sloth, greed, vanity, lust, and envy, the seven deadlies are tendencies we are all prone to. We don’t all commit murder, theft, adultery, or perjury, but we are all presented with these seven challenges which, if not handled well, can lead to lying, cheating, stealing, or even murdering. The seven are all teachers to study and learn from. They are all the ego’s addictions – and as with drug or alcohol addiction, as the 12-steppers say, we may be recovering but are never recovered.

The ego’s central conceit is to believe in itself. The ego is a virtual machine programmed to convince you that it is the machine itself. A virtual machine is a software-implemented abstraction of the underlying hardware, which is presented to the application layer of the system.

The ego is just one app. It’s the ultimate “killer app” because it fools itself into thinking it’s the computer itself, or the essence of the computer, or that the only reason the computer exists is to be a vehicle for this one app. Specifically, the ego is a kind of anti-virus app. There’s a vast interconnected world wide web, and this app's job is to pick out just one thru-way point on the great web of flowing energy and information – pick out one node on the web, a node called “a personal computer” (personal!) and protect that one tiny node from the sort of energy and information that could harm it. In order to do that, the anti-virus app has to delimit what it is protecting, draw boundaries, cordon off a chunk of the vast web and call that chunk "self."

Anger is one such protective strategy. It’s not that great a strategy. It’s an impulse that comes out of pain or fear of pain, and seeks to inflict pain back. The more civilized we become, the less often is such a strategy effective.

Posted by Meredith Garmon at 18:10