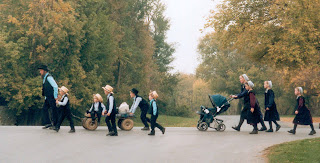 We’re all kind of set in our ways.

You know how to be the person you are. You've spent years developing the skills for navigating the kind of life you now have. You’ve had a lot of practice at it. Changing it would be difficult.

Option 1: You are adopted by an Amish family and grow up Amish.

Option 2: You are adopted by a middle-class American family into a lifestyle of dizzying and insatiable consumption, social alienation and isolation, stress, depression, constantly rushed, rarely fulfilled, disconnected from family, barely knowing your own neighbors, blinded by myriad structural distractions from ever noticing the suffering of those oppressed by the systems that support your lifestyle, and burning through resources like there’s no tomorrow, which, at average US rates of pollution and resource depletion, there might not be.

Do you value environmental protections and sustainability? Amish agriculture is extremely energy efficient. They use organic fertilizers that come from their own horses and cows. In dairy production,

than an Amish dairy farm (Peterson 31).

Modern tilling disrupts the topsoil, and leads to more run-off, depleting the soil and polluting the water. No-till methods are spreading, but


“Amish hose plowing, it turns out, is better for the soil than [even] new no-till methods.”

Because their farms are small compared to the vast monoculture farms of contemporary agribusiness, with crop rotation they can keep soil nutrients replenished and keep down pests. The Amish rarely use soil insecticides. Studies show that, yes, some Amish farms are ecologically questionable. But by and large


“there are real reasons to view Amish farming as a model for sustainable agriculture.”

Their farms are comparatively small. They use little fossil fuel. The Amish do not accept government subsidies, so they don’t have to follow policies that encourage monocropping. They reject many of the newer farm technologies that help put other farmers into debt. The result is that Amish


“profits are higher per acre and per animal than conventional farms, and their debts and expenses are much lower.” (Peterson 30)

The severe farm crisis of the 1980s never hit Amish farmers. While farm foreclosures were wiping out thousands of farmers, the Amish were doing just fine.


“In the midst of enormous economic instability, growing environmental dilemmas, and social upheaval (thousands of Iowa residents moving out of the state, countless farmers being forced out of farming and rural communities faced with decay), the Old Order Amish farmers and their communities were thriving. This type of success -- keeping farm families on the farm, building the fertility of the soil for the benefit of future generations and earning a living on small holdings – was a reality often dismissed as irrelevant in an era when agricultural leaders believed a farmer must ‘get big or get out.’ The Amish example defied this popular belief and demonstrated a viable alternative.” (Yoder 1)

Do you value social justice? Do you support ways to meet the needs of everyone and to care for the least well-off? In Amish communities,


“families take care of older and disabled members at home, never in institutions.... Amish [rules] prohibit both public insurance such as social security and private insurance policies because these would reduce members’ mutual dependence. For members, the community is its own insurance, and in times of need no one falls through the cracks.” (Peterson 37)

There are some Amish who are wealthier than others, though overall the inequality is much less that in US society generally: the gap between the wealthiest and the poorest is much, much smaller. Indeed,


“the community has an informal claim on a wealthy Amishman’s resources. He is also protected from an all-out competition with other well-to-do families in purchasing and displaying the usual array of material status symbols. Prestige is also culturally tied in to the welfare of the community so that personal reputation can only reach fulfillment in the service of the kin and church community. The religious support for both cultural practices is strong teaching against high mindedness or pride and a conscious cultivation of the virtue of humility.” (Stoltzfus 312)

They’re off the grid. They’re farming sustainably. They’re taking care of everyone.

Are they happy? It’s harder to measure that. What we can say is that they are succeeding, by their own standards of success.

Posted by Meredith Garmon at 08:03

Email ThisBlogThis!Share to TwitterShare to FacebookShare to Pinterest
Labels: The Amish Challenge