Justice and Love Together

Just love means that the partners bring roughly equal levels of power and autonomy to the relationship. Inequalities of power may come from differences in social and economic status, or differences in age and maturity. Teachers and their students have an inherent power inequality, as do counselors and their clients, ministers and their parishioners. The principle of equality also “rules out treating a partner as property, a commodity, or an element in market exchange.”


“Sexuality is of such importance in human life that it needs to be nurtured, sustained, as well as disciplined, channeled, controlled....Brief encounters...cannot mediate the kind of union -- of knowing and being known, loving and being loved -- for which human relationality offers the potential.” (Farley)

The traditional norm is procreation. The procreation imperative comes from a deeper underlying principle of fruitfulness. We can now see that making babies is only one way to be fruitful.

The relationship must not close in on itself. Love brings new life to those who love, and that new life is to be brought outward to the nourishing of other relationships. A relationship of just love strengthens the partners, and encourages them in their just work in the world. Thus is love fruitful and for the good of all.

And that leads to:


“Whether persons are single or married, gay or straight, bisexual or ambiguously gendered, old or young, abled or challenged in the ordinary forms of sexual expression, they have claims to respect from...[our faith] communit[ies] as well as the wider society. These are claims to freedom from unjust harm, equal protection under the law, an equitable share in the goods and services available to others, and freedom of choice in their sexual lives -- within the limits of” 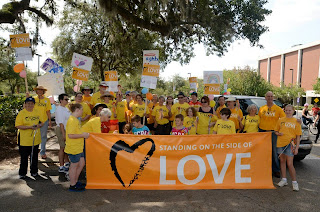 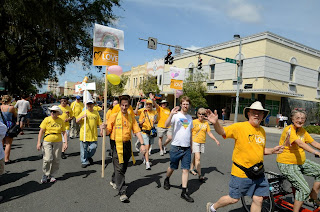 Those seven principles – seven principles, where have heard of that? -- do no unjust harm, free consent, mutuality, equality, commitment, fruitfulness, and social justice -- offer acceptance and healing where the old sexual ethic so often wounded and repressed.


“The journey of love is a very long journey. But sometimes with a sigh you can cross that vast desert.” (Mohammed Iqbal)

Standing on the side of love means also marching on the side of love, as many of the UUs of Gainesville did at the Pride Parade last Saturday (Sep 29). We wore our yellow shirts in support of LGBT acceptanace -- and a better understanding of the ethic that brings justice and love together.

Posted by Meredith Garmon at 18:22