There is something about the long cold nights of winter that turns us all into foodies. This is exacerbated by sharing it with others. Research shows that when you eat with one friend, you'll eat about 35 percent more. With a group of seven, you'll eat 96 percent more. We better chow down before anyone else gets it - it's competition.

Competition is very real - we were born to be that way. Food resources may be scarce, so when food is available and others are all eating, don't relate, eat. Don't talk with your mouth full and keep your mouth full!

The myth is that this is our only choice. We can talk with our mouths full, of compassion. We can relate, interconnect, share - we were born to be that way. Mindful eating, ethical eating, is about seeing we have a choice. We can consume both passionately and compassionately.

But it's a tough choice - there is so much fun and pleasure around food. My best times have been dinner parties I've thrown. One time, when I was in veterinary school, I had a whole freezer full of mutton. I had worked at the state fair and a couple of us took home two ewes, and we killed them and butchered them ourselves. We thought doing so made us manly veterinary students. I invited everyone I knew over to help me eat the food, but I got called away at the start of it to go fight a forest fire. When I returned, days later, my friends said it was the best dinner party I ever threw, and I wasn't even there!

Though it was a good time I decided I didn't want to kill any more sheep, and if I wasn't willing to kill them myself and insure they had a good life, I decided to stop eating them. That was hard to do because in those days vets were meat eaters. They understood that they served people first, and nonhuman animals second.

This is changing. A new program in the American Veterinary Medical Association called “One Health” (click here) aims to raise awareness that the health of humans is inextricably interconnected with the health of nonhuman animals.

Humans need healthy ecological communities. And vice versa. The new myth we are coming into is that we don't have to choose between animals and people, or those with power and privilege, and those without. That recognition is reflected in our Ethical Eating Statement of Conscience (click here). It's about environmental justice. It’s about taking care of people, and the planet, and all species, together.

It can be done. I've seen the miracle of commitment that our species can rise too. 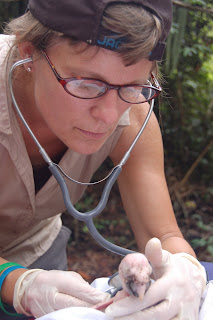 Last June, I was in Honduras working with the indigenous communities there. My goal is to help support their efforts to preserve the last 150 Scarlet Macaws left that fly over their ancestral lands. There used to be thousands of them throughout the country, but no more.

People want to steal the birds to make money. They take the young chicks from their families to sell them to people with power and privilege. There is terrible pressure on not just their ecological community, but also their human community. People with money and power are stealing their land, sometimes killing the indigenous people to take what they want.

Tomas, an elder of the village, tried to stop the illegal poaching, logging, and cattle ranching. For his efforts, he was ambushed him one day and shot four times. He nearly died. His whole village fled because they were likewise threatened. Yet, four months later Tomas returned to the ghost-like village to work with me and others on parrot conservation. We had to hire a squad of soldiers from the National Militarily to accompany us and keep us safe.

I asked Tomas why he was willing to risk his life. And he said,


"Everything is at risk so I am willing to risk everything. If we lose the parrots, we lose our way of life."

And he is not alone. This year more people have returned to his village. The macaws need these people protecting them.