The Song of the Nonsinger

My Mom, the first born, has a brother a couple years her junior, my Uncle Toby. A few years after my Mom and Dad married, Toby married Keren Coxe. From Toby and Keren came my cousins Charles (about a year and a half younger than me) and Mary Sue, younger still. For a while there, when I was wee, Mom and Uncle Toby were both graduate students at the University of Virginia, and our two families shared a big house in Charlottesville.

During that year or so, Aunt Keren was a daily part of life. I remembered her most for a disability that she claimed: she said she couldn’t sing. One day, in my four-year-old way, I wanted us all to sing, “Old MacDonald Had a Farm.” Keren said she couldn’t sing. This was frustrating for me, difficult to understand (which, I suppose, is why it has stuck in my memory all these years). What could she mean? How could anybody not be able to sing? There are certain kinds of sounds that come out of people’s mouths that are just talking and there are other sounds that are singing (at age 4, I had no concept of off-key, or missing the note), and surely everyone can produce both sorts. Everyone at my nursery school piped right up when it was time to sing “Old MacDonald,” or “Twinkle, Twinkle, Little Star.” C’mon Aunt Keren. Sing with us. But she wouldn’t. Said she couldn’t. Couldn’t! How bizarre!

A couple years ago I read Oliver Sacks’ Musicophilia. Sacks describes a number of things that can go wrong with the brain, one of which makes an otherwise normal-functioning person unable to reproduce a melody. We’re not talking “off-key” – we’re talking “no identifiable key or melody at all.” Maybe that’s what my Aunt Keren had. Or maybe she just didn't like to sing.

Graduate school is fleeting, and our two families soon had finished their programs and headed off to jobs in other cities. A few years afterwards, word reached us that Toby and Keren were divorcing. This was the mid-sixties, and my first significant exposure to the concept of divorce. It all seemed very mysterious: sad and inexplicable. 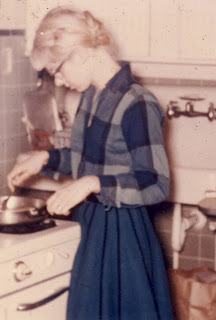 And I never saw or heard from Keren again. Uncle Toby remarried, and I had a new aunt – with an additional couple of cousins. I’d be taken for visits with the new family – or they’d visit us, or we’d both visit at my grandparents’ – once or twice a year for most of the years of my childhood and adolescence. Since Toby had complete custody of Charles and Mary Sue, Keren was out of the picture entirely. Very rarely ever mentioned, at least in my hearing. She existed only in one or two of the older snapshots in the family album, wearing the cat’s-eye glasses and a dress in that early 60s style.

I got the news today that Keren Coxe died last week, on March 26, at age 71. Cardiac arrest. In reading the obit in the Washington Post, and in googling around, I learned what a fascinating woman my missing Aunt Keren actually was.

In 1960, she became the first female physics major to graduate from Virginia Tech. I hadn’t known that. It fits that my Uncle Toby, an engineer, would have liked a scientific-minded woman. Indeed, the big sister he’d always looked up to (my Mom) was herself working on a PhD in physical chemistry during the year we lived together in that big house in Charlottesville. My grandparents, born in 1908 and 1909, somehow got it into their heads, apparently, to teach their children to value the pursuit of truth and the power of science to progressively reveal truth – and that the progress of truth was more important than traditional gender roles. So Mom grew up unafraid to be a pioneering female scientist, and her brother grew up unafraid to marry one.

After the divorce, as I learned just today, Keren worked as a statistician for Jones & Laughlin Steel in Pittsburgh. In 1970, she completed a master's degree in health statistics from the University of Pittsburgh. The next year, she moved to Washington, DC, where she lived the rest of her life. In 1981, she got a master's degree in theoretical statistics from George Washington University in DC.

Then there was a car accident. She was run down by a drunk driver. Yes, I had heard something about that. What I hadn’t quite picked up was that the brain trauma incurred in the accident made her unable to do statistics, but awakened a passion for art. She started working in stained glass and moved on to work in watercolor, other water media, design and collage.

Here's one of her works: She also began posing nude for art students at the Corcoran College of Art. Of modeling, one newspaper quoted her as saying: “I found I liked it almost as much as I liked being a statistician.”

She lived with Alex Belinfante, an econometrician, for the last 24 years of her life.

In 2004 September 17, The Washington City Paper ran an article about Keren and Alex. It seems that, to some extent, they lived on the hors d’oeuvres at art receptions.

According to the article: “Since they met in 1981, Coxe, 60, and Belinfante, 65, have dined almost exclusively at gallery openings and other cultural events. ‘The number of art openings we go to in one day varies a lot; anywhere from zero to over a dozen,’ says Belinfante.”


You can’t ingest that much raw celery and dip without getting a name for yourself, and the Chevy Chase couple has several: “the Eaters,” “the Munchers,” “the Moochers,” “the Art Bums,” “the Cheese Critics.” Whatever they’re called, their voracity is legendary.
“Some people get some food at an art opening [that] they kind of eat because it’s there,” says B. Stanley, artistic director of the District of Columbia Arts Center. “It’s not like they really care about eating this food. It’s obviously not very good food.”
Coxe and Belinfante are different. “These guys,” Stanley says, windmilling both hands in front of his mouth, “it’s like they’re having dinner or something. It looks like somebody’s who’s watching the news while they’re eating dinner.” And they sometimes opt for takeout, he adds. “If it’s cookies or something you can put in your pocket, those guys are up for it.”
They also eat with singular focus. Painter Dana Ellyn Kaufman, who was at a 2002 opening of erotic art at Arlington’s old Khoja Gallery, remembers a votive candle on the food table setting Coxe’s sleeve afire while she loaded up with crackers and Hershey’s Kisses. “She was very cool about it,” says Kaufman. “Just put it out and went along with her business. I think I’d have been...screaming like a little girl if it happened to me.”

I’ve sometimes, myself, been known at various events to be paying a little more attention to the refreshment table than was quite seemly. Guess I’ve got a little of my Aunt Keren in me.   Google images located this 2006 photo:

Smart woman. Creative. Weird. I wish I’d known her past my pre-school years. I myself am not such great shakes as a singer: I go off-key, miss notes. I can, however, hum "Mary Had a Little Lamb" in a way that you'll recognize the tune. In some ways, Keren couldn't pick up and sing along with the melodies of the social world. In some ways, I can't either, though I do, as it were, recognizably hum the simple tunes. We are not genetically related, Aunt Keren and I, but some kind of vague resembling vibe connected her with my family to be the mother of my cousins, and I do see some of her in me, though the differences are certainly great (I'm not and have never been a physicist, statistician, artist, nude model, or art collector). I, too, may some day find myself wearing my wristwatch almost at the elbow. I'm already a fan of bright tie-dyed t-shirts. Not to mention cheese cubes.

Keren sang with her life -- with her brain and with her body -- and she sang of numbers, of colors and shapes, forms and figures. She sang a song that teaches us, if we give it a sympathetic listen, to expand our conception of how it's possible for humans to be, and to thrive, in this world.

Since posting the above, have heard from Alex Belinfante. He says that Keren was a passionate lover of opera and excellent music. She had a perfectionist's ear, and chose not to sing because it didn't match what she felt was worth hearing.

Regarding the 2004 article in the Washington City Paper, Alex wrote to the paper:


In spite of John Metcalfe’s attempts to check facts prior to publishing “The Hunger Artists” (9/17), it nevertheless contained factual errors. For starters, he got our ages mixed up. Keren is 65 and I am 60. He failed to mention that while “pacing around the room” at the Korean Cultural Service we were admiring the art. Stanley of DCAC has selective memory. They have only once served any food worth mentioning in the few times that we have been there. (We rarely go there because it is hard to park in Adams Morgan.) That was the occasion in 1995 he mentioned, where the food, contrary to his characterization of it, was very good, and donated by a restaurant. Anyone who sees my pockets knows there is no room for food in there, and Keren usually doesn’t have any pockets. The person that used to stuff his pockets with food at openings was a now-deceased lawyer friend of ours. Keren’s daughter rarely goes to art openings. Clark of MOCA doesn’t need to use “reverse psychology” to keep us from eating much. The only times they serve decent food is when it is provided by someone else. He knows that we will buy art if it is to our liking and reasonably priced, regardless of the cuisine. Gallery owners that are more concerned about how much we eat than they are about selling their art have their priorities mixed up. If they can’t afford to provide food, they shouldn’t do so. (Most galleries just provide drinks and maybe a little junk food.) We have often seen gallery owners’ attitudes toward us change 180 degrees when we buy art from them. My taste in art is not the result of a “medical condition.” My difficulty in distinguishing reddish brown from greenish brown may explain my distaste for brownish art, but it has little to do with my taste in art otherwise. Metcalfe’s uninformed snide remarks about our art collection show that he has little appreciation for colorful abstract art. This is exemplified by his characterization of paperweights as “glass blobs” and our house as a “monster.” Maybe he should have paid more attention to the retired Georgetown professor at the Korean Cultural Service than he did watching us.

In his letter (9/24) Campello of Fraser is wrong about our never feigning interest in the artwork at his galleries. While most of his shows are not to our taste, we particularly enjoyed the Dali-inspired show a while back at his Georgetown Gallery. Most of the time when we do go there it is simply because it is part of the art walks in Canal Square and Bethesda, and we don’t stay very long. The gallery he mentioned in Leesburg has not gone out business; it has simply changed its name and later moved. The birthday party he referred to was for Keren’s son (not daughter) who lives in Leesburg, and who does not normally attend art openings. The only thing in the back room refrigerator was beer (not food), which he helped himself to after he observed other people (not associated with us) drinking it.

Posted by Meredith Garmon at 15:58