Of Arms and the Man I Sing

The previous "Evolution's Arrow" segment of Lake Chalice concluded with the question: “Was Gould right that there is no direction for evolution? Species change, and there’s no general characterization of the overall tendency of that change?” Let’s think about this.

Ultimately nothing separates us from the other animals, other life, or from the earth itself. A little more of this, a little less of that – no firm barriers. It’s a story that evokes depths of gratitude; wonder and awe. And, I believe, although we cannot know the details, it is headed for something grander, we know not what. Science writer Robert Wright argues against Gould and in favor of the thesis that evolution necessarily tends toward greater complexity. In the end, I find Robert Wright more persuasive. Two powerful forces engender ever-greater complexity: competition and cooperation.

Robert Wright points to the “arms race” phenomenon, which, he says, Gould ignores. It isn’t just the environment – as in climate or food sources or the oceans coming in or going out – that changes to produce new evolutionary pressures. Significant pressure comes inter-species competition: predators and prey compete to outsmart each other like Wile E Coyote and Roadrunner, and, somewhat less significantly, predators compete with other predator species to get to the food first. Another pressure comes from competition between individuals within certain social species. 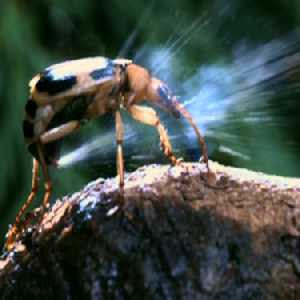 Consider the beetle – and remember we have a common ancestor with them, too. When beetles first came along, there weren’t any animals specifically adapted to eat them. After a while, “various animals did acquire, by natural selection, the means to kill and eat” beetles. This spurred a response. The bombardier beetle is able to squirt out a scalding chemical mix upon would-be diners. This prompts beetle predators to adapt accordingly. Skunks and one species of mice “have evolved specialized innate behavior patterns that cause the spray to be discharged harmlessly, and they can then eat the beetles.” This sort of arms race among species drives them toward complexity.

Without the arms race, there’s less pressure for increased complexity. During the same period that North American herbivores were getting smarter,


“The male chimps, it turns out, spend lots of time scheming to top each other. They form coalitions that, on attaining political dominance, get special sexual access to ovulating females – at the great Darwinian expense of less successful coalitions. So males with genes conducive to political savviness should on average get the most genes into the next generation, raising the average level of savviness. And the savvier the average chimp, the savvier chimps have to be to excel in the next round. And so on: an arms race in savviness – that is, an arms race in behavioral flexibility. There’s little doubt that this dynamic has helped make chimps as smart as they are, and there’s no clear reason why the process should stop where it is now.” (271)

Meanwhile, the female chimps have their own selective pressure to develop political savviness. Female savviness increases the prospects for their young to survive. Competition pushes species toward more behavioral flexibility – more complexity.

Posted by Meredith Garmon at 19:47