Flukes of the Universe

Our hearts and heads need a story. We need a story about, in Douglas Adams' phrase, "life, the universe, and everything." We need that story to be both scientifically respectable and spiritually relevant. Evolution provides a scientifically respectable story about the emergence of life. Moreover, more and more people are understanding and telling that story in a way that is spiritually relevant. 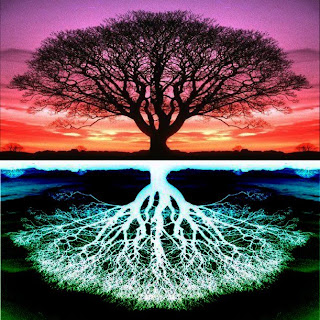 Evolution does not present us with a linear picture, a straight line of development. Instead, evolution presents a picture of a tree of life, starting at a single point and branching off into the various species. There are billions of branches on that tree. The vast majority of them terminate before reaching the present. And there we are, we homo sapiens, at the tip-end of one twig.

Now we get to a question that scientists are still divided on: Is evolution headed in any particular direction? In terms of species, evolution is heading in billions of directions all at once. The common ancestor of humans and chimps lived about 7 million years, the common ancestor of gorillas, chimps, and humans, about 10 million years ago, and the common ancestor of orangutans, gorillas, chimps, and humans, about 14 million years ago. This means that we are more closely related to chimps than we are to gorillas – and it also means that chimps are more closely related to us than they are to gorillas – they are, in fact, exactly as far removed from gorillas as we are.

If the tree is a good-sized oak tree, then our twig goes back only about an inch before reaching the point where the twig leading back out to the chimps branches off. 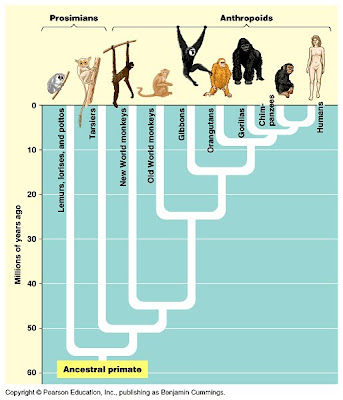 There. Our place in the grand scheme of things. On the chimpanzee twig.

This story of a growing, branching tree of life is a story that tells us about who we are, how we got here, what our place is. It’s scientifically reputable, and at the same time, for many of us, spiritually relevant, for it is a story of interconnection. It’s a story that shows us to be the product of grand, noble and creative forces beyond our control -- and also shows us to be the recipient of grace – that is, of gifts that we have done nothing to deserve.

This tree of life did not emerge for the purpose of producing a twig of humans or human-like creatures. If you went back in time 2 billion years and started life on Earth from scratch all over again, the chances that you would ever get a primate, let alone a human, are vanishingly small. Humanity is a cosmic accident. According to a Max Ehrmann's 1927 prose poem, Desiderata,


“you are a child of the universe, no less than the trees and the stars” (full text: click here.)

Put it rather this way: you are a fluke of the universe, and so are the trees and the stars.

Posted by Meredith Garmon at 13:55