In the story in "The Gospel According to Mark," there are three women: 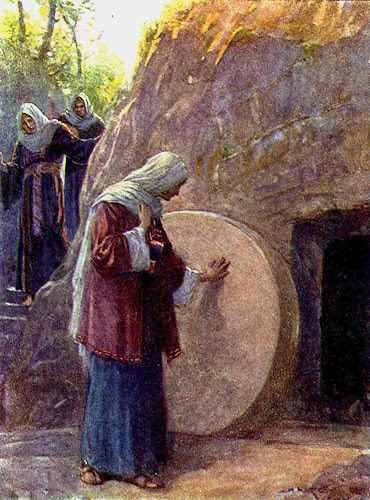 There is a tone of concern about how they are going to pull this off:


“They had been saying to one another, ‘Who will roll away the stone for us from the entrance to the tomb?' When they looked up, they saw that the stone which was very large, had already been rolled back.” (16:3-4)

That’s not good. What are they walking into here? Have the Romans laid a trap to arrest more of the rebel Jesus’ followers?


“As they entered the tomb, they saw a young man, dressed in a white robe, sitting on the right side; and they were alarmed.” (16:5)

Is he secret police? Is he a Roman agent?

These words do not reassure the three women. They turn and run away from this creepy guy.


“So they went out and fled from the tomb, for terror and amazement had seized them; and they said nothing to anyone, for they were afraid.” (16:8)

That’s how the Gospel of Mark ends: right there, with three scared women running away. They don’t tell anyone; no one else comes to check out the tomb. End of story. The last three words of the Gospel of Mark are, “they were afraid.”

If you check your Bible, you’ll probably see a dozen additional verses, but if it is a scholarly edition, you’ll also see a note that indicates those extra verses are doubtful. Scholars believe the extra verses were added later. The Gospel of Mark originally ends starkly -- in uncertainty and fear. Maybe the ethical movement founded by Jesus will continue. Yet it’s clear that fear of political repression will be an ongoing reality for that movement.

Now let’s look at the story in "The Gospel According to Matthew." This time it's two women rather than three:


“After the sabbath, as the first day of the week was dawning, Mary Magdalene and the other Mary went to see the tomb. And suddenly there was a great earthquake; for an angel of the Lord descending from heaven, came and rolled back the stone and sat on it. His appearance was like lightning, and his clothing white as snow. For fear of him the guards shook and became like dead men. But the angel said to the women, ‘Do not be afraid; I know that you are looking for Jesus who was crucified. He is not here; for he has been raised, as he said’ . . . So they left the tomb quickly with fear and great joy, and ran to tell his disciples.” (28:1-6, 8)

With fear and great joy. In Mark, the women were simply scared. This time they have a mix of fear and joy. A key point here is that in Matthew, but not in Mark, there are guards. Mary and Mary can see that the guards are scared stiff. If the Roman guards are scared, then this white-clad guy is evidently not, himself, a Roman agent. So the political repression fear that was predominant in Mark is mitigated in Matthew.

Just as the two Marys are leaving the tomb, they encounter Jesus, and he speaks to them briefly:


“Suddenly Jesus met them and said, ‘Greetings!’ And they came to him, took hold of his feet, and worshiped him. Then Jesus said to then, 'Do not be afraid; go and tell my brothers to go to Galilee; there they will see me." (28: 9-10)

Some of Jerusalem's rulers catch wind of the news that Jesus' body has gone missing. They concoct a story, which they bribe the guards to affirm, that some of Jesus' followers came in the middle of the night and took the body away. Only in Matthew do we get this strange little story about bribing the guards to say, “His disciples came by night and stole him away while we were asleep” (28:13). Maybe that’s exactly what did happen, and the Matthew storyteller is trying to discredit that by attributing it to the lies of bribed guards. Still, overall, Matthew's is the most straight-down-the-middle Easter story of resurrection. The fundamental optimism is much clearer than in Mark. Yes, there are still some swirling political realities that put Jesus’ followers at risk -- but the basic point is the good news that Jesus did not really die.

Posted by Meredith Garmon at 09:13