It should be said of Yunmen that he was too poor to prepare even the plainest food and too busy to write a draft. Suddenly he took up the shit-stick to support the gate of Buddhism. You can see how the Dharma has decayed. 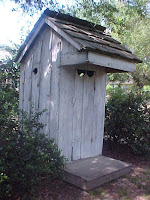 The true self speaks a foreign language
In which the words have no meaning.
There's something in the brackets that looks like a meaning.
Avert your eyes.

Edmund Husserl returned from the outhouse and said,
"Bracket off interpretations and meanings.
Get to the bare and intimate experience."
Kanshiketsu!
Bare, intimate, meaningless.
Now you speak the true self's tongue.

Previous:
Maybe Better Go Naked
Don't Beat the Dog
Staff Issues
The Old In and Out
What Is the Sound of an Arrow Hitting Oatmeal?

Pangs of the Layman:
The Increase of Mystery
To Recognize, Look
Hard (Or Easy) To Swallow
Prayers That Reach the Gods. Or Not.
"Shut up," he explained.

Posted by Meredith Garmon at 22:56