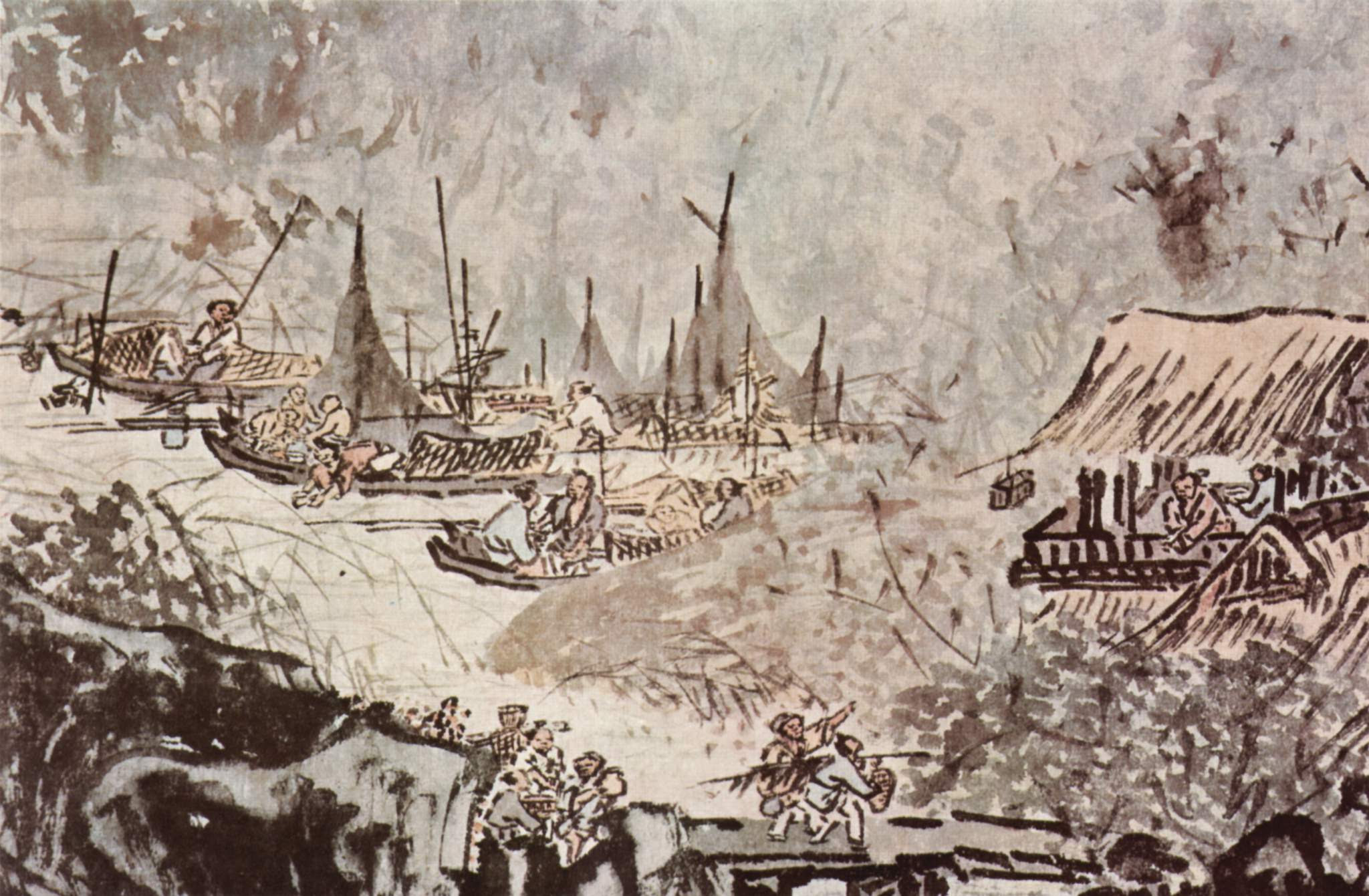 
Therefore the sage manages affairs without doing anything, and conveys his instructions without the use of speech.
All things spring up, and there is not one which declines to show itself;
they grow, and there is no claim made for their ownership;
they go through their processes, and there is no expectation (of a
reward for the results).
The work is accomplished, and there is no
resting in it (as an achievement).
The work is done, but how no one can see;
'Tis this that makes the power not cease to be.


Therefore the intelligent man accepts what is as it is. In seeking to grasp what is, he does not devote himself to the making of distinctions which are then mistaken to be separate existences.
In teaching, he teaches, not be describing and pointing out differences, but by example.
Whatever is exists, and he sees that nothing is gained by representing what fully exists by a description – another lesser, diluted kind of existence.
If something exists which cannot be wholly revealed to him with his viewpoint, he does not demand of it that it be nothing but what it seems to him.
If some one else interprets him, he does not trust that interpretation as being equal to his existence.
If some part of him stands out as if a superior representative of his nature, he will not surrender the rest of his nature to it.
And in not surrendering the whole of his nature to any part of it, he keeps himself intact.
This is how the intelligent man preserves his nature.


The truly wise accept this and they work diligently without allegiance to words. They teach by doing, not by saying; are genuinely helpful, not discriminating; are positive, not possessive; do not proclaim their accomplishments, and because they do not proclaim them, credit for them can never be taken away.


Therefore the sage keeps to the deed that consists in taking no action and practises the teaching that uses no words.
The myriad creatures rise from it yet it claims no authority;
It gives them life yet claims no possession;
It benefits them yet exacts no gratitude;
It accomplishes its task yet lays claim to no merit.
It is because it lays claim to no merit
That its merit never deserts it.


Therefore the sage goes about doing nothing, teaching no-talking.
The ten thousand things rise and fall without cease,
Creating, yet not possessing,
Working, yet not taking credit.
Work is done, then forgotten.
Therefore it lasts forever.


In comparison, the sage, in harmony with the Tao,
needs no comparisons,
and when he makes them, knows that comparisons are judgments
and just as relative to he who makes them,
and to the situation,
as they are to that on which the judgment has been made.
Through his experience, the sage becomes aware that all things change,
and that he who seems to lead, might also, in another situation, follow.
So he does nothing; he neither leads nor follows.
That which he does is neither big nor small;
without intent, it is neither difficult, nor done with ease.
His task completed, he then lets go of it;
seeking no credit, he cannot be discredited.
Thus, his teaching lasts for ever, and he is held in high esteem.


The sage knows how relative
Are all these oppositions;
He does not attempt to make the one
Prevail over or exclude the other.
Thus he acts without contending;
He teaches without words;
He accepts what comes without turning away;
He loves but does not possess;
He enjoys but does not appropriate;
He accomplishes but claims no credit.
Because he refuses to be given credit,
It cannot be taken from him.


The gentle assume no distinction,
Undertake no action,
But accept the rise and ebb of things.
They nurture, but do not own,
And live, but do not dwell.


That’s why the wise soul
does without doing,
teaches without talking.
The things of this world
exist, they are;
you can’t refuse them.
To bear and not to own;
to act and not lay claim;
to do the work and let it go:
for just letting it go
is what makes it stay.


The Masters get the job done
without moving a muscle
and get their point across
without saying a word.
When things around them fall apart,
they stay cool.
They don't own much,
but they use whatever's at hand.
They do the work without expecting any favors.
When they're done,
they move on to the next job.
That's why their work is so damn good.


Hence,
the sage lives in the state of non-action – of eternal balance,
And teaches by the precept of slilence – and through his silent deed.
He accepts things as they arise,
Creates without possessing
Performs without depending,
Accomplishes without claiming credit.
Because he does not claim credit for himself,
His virtues endure forever more.


Therefore the Sage is devoted to non-action,
Moves without teaching,
Creates ten thousand things without instruction,
Lives but does not own,
Acts but does not presume,
Accomplishes without taking credit.
When no credit is taken
Accomplishment endures.

"They act on behalf of things" (Ames-Hall). What is each thing's "behalf"? Maybe we don't know, but what would it be like to live with that question? Suppose every single thing we encountered throughout the day, all day long, prompted us to ask, "What is this thing's behalf, and how can I act on its behalf?" My colleague, Rev. Jacob Trapp (Unitarian Universalist minister, 1899-1992), his memory be blessed, is the only translator here to use "love": "He loves but does not possess." The acting on things' behalf is the manifestation of that love, and what allows the sage to "give them life" (Lau). "Lives" in Addis-Lombardo occupies the very spot "loves" has in Trapp -- for living and loving become the same thing and either word is an equally satisfactory translation.

Be careful at that last line: "Thus, his teaching lasts for ever, and he is held in high esteem" (Rosenthal). Don't let this tempt you down ego roads of delusions of permanence -- or, worse, esteem. Feng-English and Mitchell each repeat the "lasts forever" notion, and most of the others are similar. Merel and GNL are perhaps wise to simply leave off that last and dangerous line. It's not that Rosenthal, et al, aren't expressing truth -- just watch out for taking this truth in the wrong way. See it in the light of Legge: "The work is done, but how no one can see; 'Tis this that makes the power not cease to be." It's not you that "lasts forever," nor your mighty, gloriously selfless deeds. Rather, the flow of your life/love, acting and letting go, waters "the power" and keeps it going. "The power" isn't you. The most that can be said of you in all of this is that you have preserved your nature (Bahm: "This is how the intelligent man preserves his nature.") -- not so much "forever" as: through the midst of the myriad things and their many demands. Thus we arrive at Ames-Hall: "It is only because they do not take credit for them that things do not take their leave." Ah! This is not about lasting forever, or even about what can't be taken away. It's about constant presence to things. Taking credit distances us from reality, from the life/love flow. Letting go of status, accomplishment, credit, we can simply be present to things-as-they-are. Then they are with us and do not take their leave.

Which is not to say that the graceful, self-absent-and-therefore-self-present work of the sage doesn't endure. It's just that this is none of our concern.

Ames and Hall say in their commentary, "The sages do not take sides, but are catalytic in facilitating the flourishing of the process as a whole....every constituent is necessary for every other constituent to be what it is. The job of the sage, then, is to enable each participant in the drama to contribute itself fully to the performance."
* * *
Next: Saturdao 5.
Previous: Saturdao 3.
Beginning: Saturdao 1.

Posted by Meredith Garmon at 09:01