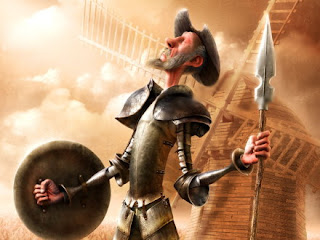 Water images and metaphor are especially emphasized in the Chinese tradition called Daoism (or "Taoism"). Alan Watts’ last book before he died was: Tao: The Watercourse Way. Daoism teaches that


“the great Dao flows everywhere, to the left and to the right. It loves and nourishes all things, but does not lord it over them.” (Dao De Jing, ch. 34)

Even Don Quixote – the fictional character of Cervantes’ novels -- is taking the path of least resistance if we take into account all the resistances at work.

Don Quixote has been a dear friend of mine for many years, and I have slowly learned that, well, he’s crazy. When I was in eighth-grade, my favorite teacher, Mr. Benson, a young man I looked up to as a role model, taught English and drama. That year I was in eighth-grade, Mr. Benson played Don Quixote in a local production of “Man of La Mancha.” I loved it. I went to see him in it twice, I bought the soundtrack album and memorized all the songs. I loved Don Quixote. "Dream the impossible dream." Yes! "Fight the unbeatable foe; right the unrightable wrong; reach the unreachable star." That’s what I wanted to do. “Love pure and chaste from afar.” How noble! (Of course, when you’re a thirteen-year-old pimply-nerdy-awkward kid, that’s pretty much your only option.)

The good Don is still with me – a companion voice I carry around – though I am not as smitten with him as I was. Quixote believes he is nobly taking on the path of most resistance -- fighting against “the system,” the establishment, City Hall, dreaming that impossible dream, refusing the quiescent, easy, submissive path. Quixote is able to believe that because he isn’t very self-aware. He has fixated on certain conceptions of nobility and principle, and he’s very attached to those conceptions, and rejects every part of himself that doesn’t fit his predetermined picture. He’s at war with himself, and in the name of his conceptions he’s ready to fight, vanquish, slay. He has erected huge inflexible banks of a story about what nobility and principle are, and he’s prepared to kill in compliance with their dictates. He’s not avoiding a path of least resistance; rather, he’s following the path of least resistance, given those huge resistances at work in him. He’s not mindfully attending to what’s there, but pouring all his energy into sustaining his delusion. "His brain," writes Cervantes, "dried up."

The lesson of water is not: change yourself so as to take the path of least resistance. The lesson is: you already do so, so notice what the resistances are that are directing you on the path you’re on. Look at them with openness and curiosity: what’s at work here? Where did that come from?

When we gain a greater self-awareness of our resistances, some of them soften up a bit. New paths start to open for us because we aren’t so fixated on our prior conceptions. It starts to feel freer, more able to be fluidly creative in the moment – life begins to feel less like white water through a narrow gorge and more like a smoothly flowing river.

On the social and ecological level, we confront the same need – the need for awareness of the flow. We turn on the faucet and out gushes water, for less than a penny a gallon. Where is it coming from, guided by the resistance of various pipes to flow from our spigot?

Posted by Meredith Garmon at 13:20