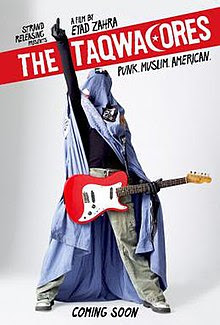 In Michael Muhammad Knight's 2003 novel, which became a 2010 film, The Taqwacores, the young adult Muslim residents of a punk house in Buffalo hatch a scheme to host a national gathering of Islamic punk bands. They'll bring punk bands from all over the country together for one big punk Islam festival-party-concert. Jehangir is the primary energy for organizing the project. There is a controversy in the house about whether to invite a band called Bilal’s Boulder, a punk band that adheres to a particularly conservative and strict brand of Islam.

Bilal’s Boulder arrives wearing turbans and traditional Arabic attire. They size up the house and announce they won’t sleep on the floor in the house, as all the other bands are – because a woman will be staying somewhere under the same roof. They’ll have none of that. They’ll sleep in their van – even though it’s winter and they’re in Buffalo, and it’s freezing.

The next day, during the concert Jehangir himself is persuaded to perform. Highlighting that tension of individual vs community, Jehangir sings a punk cover version of Frank Sinatra’s, “I Did It My Way.” As he finishes, Rabeya, the burqa-wearing “riot girl” performs an act that seems deliberately planned to disturb, shock, offend, and enrage the strict tough guys of Bilal’s Boulder who, having finished their set, are standing in the crowd. They react violently, and in the melee, Jehangir receives mortal blows. The advocate for openness is killed by the closedness that he had insisted on being open to.


“The Five Percenters have a devastating critique of organized religion that, to me, mixes with punk rock because in a so-called punk view of religion, you are your authority, and you’re not entrusting your soul to other human beings. The basic idea of the Five Percenters is that all this divine power that you fear as being something outside of yourself – that’s gonna come down and crush you -- all that power is actually within you. You are your Allah. So rather than entrust your religion to the imams or the priests or whoever, you become the master of your own cipher.”

Knight, it seems, is re-inventing the Protestant reformation – for, after all, it’s been 500 years since Martin Luther proclaimed the priesthood of all believers. Knight is applying that Reformation concept to Islam rather than Christianity, and perhaps, "You are your Allah," goes a bit further than, "Priesthood of all believers." In any case, the Protestant reformation requires periodic re-invention, for in our quest for community we are prone to forget that each of us is of the priesthood, you are your Allah, no one can make your spiritual truth but you, no one but you can do that work. It's up to you to open yourself to grace, which then takes over.

That’s a hard basis to make community upon. Hard. Not impossible.

Posted by Meredith Garmon at 07:37