Curse of the Frontal Lobe 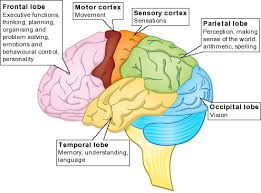 People who have received injuries to their frontal lobes can appear and act indistinguishably normal. They can engage in pleasant conversation with you about the weather, or the drapes. They can reminisce with you about the great play at the end of the game last night. They express likes and dislikes, seem to have a coherent personality, they're socially amiable, and can solve logic problems. But ask them what they'll be doing tomorrow, and they simply cannot process the question. Psychologist Daniel Gilbert tells the story of Patient NN:


“NN suffered a closed head injury in an automobile accident in 1981, when he was thirty years old. Tests revealed that he had sustained extensive damage to his frontal lobe. A psychologist interviewed NN a few years after the accident and recorded this conversation:
Psychologist: What will you be doing tomorrow?
NN: I don't know.
Psychologist: Do you remember the question?
NN: About what I'll be doing tomorrow?
Psychologist: Yes, would you describe your state of mind when you try to think about it?
NN: Blank, I guess. It's like being asleep; like being in a room with nothing there; like swimming in the middle of a lake. There's nothing to hold you up or do anything with.
For NN, tomorrow will always be an empty room, and when he attempts to envision later, he will always feel as the rest of us do when we try to imagine nonexistence or infinity.” (Daniel Gilbert, Stumbling on Happiness, 14-15.)

With our frontal lobes we play out various future hypothetical scenarios, and through connections to the limbic system, where emotion happens, those scenarios compel attention. The frontal lobes, in other words, not only create imagined futures but also generate anxiety about our futures. This explains why the frontal lobotomy – that is, the destruction of some part of the frontal lobe -- “became a standard treatment for cases of anxiety and depression that resisted other forms of therapy.” Lobotomized patients were indeed calmer and less depressed. They also “performed well on standard intelligence tests, memory tests, and the like.” Yet, as doctors began to notice, these patients “showed severe impairments on any test – even the very simplest test – that involved planning. . . . They found it practically impossible to say what they would do later that afternoon” (Gilbert 13).

So here we are -- we nonlobotomized humans -- with this amazing capacity to envision our futures with a level of scope and detail far beyond what any other animal can do – and at the same time so seized by our own imagined future scenarios that we spend the better part of our waking hours slavishly in the service of future selves who can never repay us and will scarcely acknowledge that we gave them the best years of our lives.

Because of this capacity to think about the future, humans could invent agriculture, plan cities, build civilization so that we can inhabit this glorious world of fax machines, traffic jams, ipods, strip malls, garage-door openers, cable TV, and spam (both the canned meat and e-mail versions). Because of these hugely enlarged frontal lobes, our lives are, as John Lennon said, what happen to us while we're busy making other plans.

Living in the future, working on some scenario of a bigger house or a trip to Paris, we miss the joy of our present moments. Sometimes we miss chances to have fun with our kids. What's the answer? Lobotomies for everyone? There must be a better way.