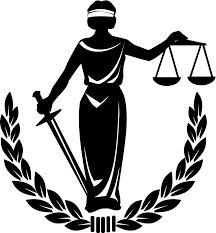 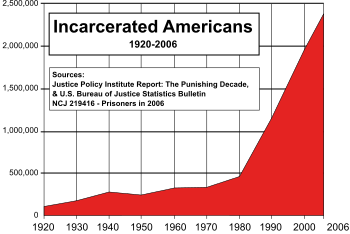 From 1920 to 1980, the number of prisoners in the US increased slowly and steadily – as the country’s population was also increasing:
Beginning in 1980 and the election of Ronald Reagan, who launched a “war on drugs,” our incarceration rate took a steep turn upward. Suddenly, we were up to 1.15 million prisoners by 1990, and over 2 million by 2001. In 20 years, the US prison population more than quadrupled. What are we doing?

We’re certainly not healing the wound created by the crime. We’re not making things right – as the term “justice” implies. We are warehousing the ones we think are dangerous, walling them off in the interests of our safety – though, in fact, most of our prisoners are in for nonviolent offenses.

But the idea of restorative justice – restoring what was lost, healing what was injured – calls to our hearts. We want to find a way to come back together to walk the sacred way, for we have been divided by the prison walls that keep us apart. We are further divided by delegating responsibility for our collective well-being to authorities entirely outside ourselves. All we can do is call in the police, prosecuting attorneys, and they take it from there. They do…whatever it is that they do.

Of course vigilantism is always a bad idea, and measures to prevent it are good. At the same time, we as a people are damaged by being so completely divorced from the systems that provide us the only kind of justice available.

Of course there are people so damaged and so dangerous they have to be restrained.

Of course there are times when the armed force of police is necessary. That restraint and police force are sometimes needed does not mean they are always needed when a law has been broken, and we have become a people that rely on them much more than we have to.

New work and new experiments into the possibility of restorative justice are emerging.


“a process where all stakeholders affected by an injustice have an opportunity to discuss how they have been affected by the injustice and to decide what should be done to repair the harm. Restorative justice is about the idea that because crime hurts, justice should heal. Thus, conversations with those who have been hurt and with those who have afflicted the harm must be central to the process.”

Posted by Meredith Garmon at 12:12