The Abundance of Neighborliness 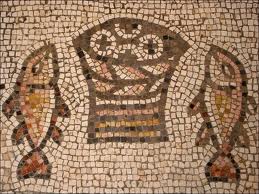 What happened with Jesus and those five loaves and two fish and the thousands of people to be fed? Neighborliness happened. The "kin-dom" of god – a.k.a. public life reorganized toward neighborliness – happened.

A crowd of people had gathered to hear Jesus teach. They had secreted away for their own use food for themselves. Under the influence of this remarkable teacher, they began to open up, began to sense the intrinsic abundance of the life they breathed, and the universe in which they swam. From that sense of boundless provision welled up an urge to share of this manifest plenty. From the bottoms of bags and folds of clothes came forth food to share. From the divinity within them, the divinity that is always there, lying too-often unnoticed, came forth this food. It came from God, which we call by many names, one of them being neighborliness.


“The disciples, asked to feed the crowd, are sure that food is scarce; Jesus performs a ‘miracle’ to reveal how abundant food is even when there is none in sight. In this story, as throughout his active life, Jesus wanted to help people penetrate the illusion of scarcity and act out of the reality of abundance.” (Parker Palmer, The Active Life, 123)

Parker Palmer was once a passenger on a plane that pulled away from the gate, taxied to a corner of the tarmac, and stopped.

The pilot came on the intercom: “I have some bad news and some worse news. The bad news is there’s a storm front in the west. Denver is socked in and shut down. So we’ll be staying here for a few hours. That’s the bad news. The worse news is that we have no food, and it’s lunch time.”

Everybody groaned. Some passengers started to complain. Some became angry. But then, Palmer said, one of the flight attendants did something amazing. She stood up and took the intercom mike and said, “We’re really sorry folks. We didn’t plan it this way and we really can’t do much about it. And I know for some of you this is a big deal. Some of you are really hungry and were looking forward to a nice lunch. Some of you may have a medical condition and really need lunch. Some of you may not care one way or the other, and some of you were planning to skip lunch anyway. So I’ll tell you what we’re going to do. I have a couple of breadbaskets up here and we’re going to pass them around and I’m asking everybody to put something in the basket. Some of you brought a little snack along—something to tide you over—just in case something like this happened, some peanut butter crackers, candy bars. And some of you have a few LifeSavers or chewing gum or Rolaids. And if you don’t have anything edible, you have a picture of your children or spouse or girlfriend/boyfriend or a bookmark or a business card. Everybody put something in, and then we’ll reverse the process. We’ll pass the baskets around again and everybody can take out what he/she needs.”


“What happened next was amazing. The griping stopped. People started to root around in pockets and handbags, some got up and opened their suitcases stored in the overhead luggage racks and got out boxes of candy, a salami, a bottle of wine. People were laughing and talking. She had transformed a group of people who were focused on need and deprivation into a community of sharing and celebration. She had transformed scarcity into a kind of abundance.”

After the flight, which eventually did proceed, Parker Palmer stopped on his way off the plane and said to her: “Do you know there’s a story in the Bible about what you did back there? It’s about Jesus feeding a lot of people with very little food.”

Posted by Meredith Garmon at 16:51