As the books of Maccabees tell it, the Seleucids had been ruling over the Jews in Jerusalem for about 30 years when, in 168 BCE, the Emperor Antiochus IV was rumored dead. Jason, who had been the high priest of the temple in Jerusalem, until outmaneuvered by Menelaus, believed the rumor to be true. Jason took advantage of the perceived interregnum to mount a little army of about 1,000 – tiny, but not bad for a priest. Menelaus fled. Emperor Antiochus, rumors of whose death were highly exaggerated, was just coming off a bit of a humiliation in Egypt. Finding that his appointed high priest, Menelaus, had been run out, Antiochus took out his frustrations on Jerusalem. He attacked the town, restored Menelaus as high priest of the temple, massacred a few thousand Jews, outlawed Jewish rites and traditions, and ordered that Zeus be worshipped as the Supreme God. Antiochus then went on his way, leaving behind a governor in Jerusalem, Philip, to enforce Hellenic religion.

Had the people of Jerusalem been (post)modern Unitarian Universalists, they might have adapted to the new worship requirements. "No big deal," they might have said. "Zeus is simply a metaphor for Yahweh. Just go with it." 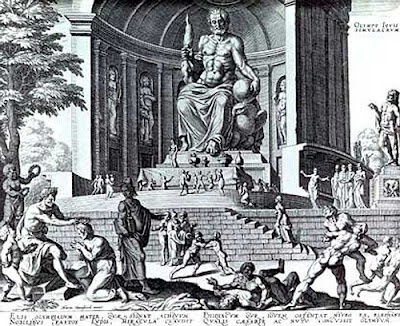 The people of the second century before the Common Era were not prepared to think that way. The word “Zeus”, and performing the particular rituals of Greek worship, like bowing to a statue of Zeus, meant “us” if you were Antiochus, and meant “them” if you were Jewish. Tribal identity was at stake. There’s no metaphoring around when tribal identity is at stake, when “us” is fighting for its continued existence as a distinct identity against "them.”

The more Hellenized Jews, however, didn’t see it that way. They actually were saying, essentially, “This is no big deal. Just go with it.”

First Maccabees relates how Greek soldiers forcibly gathered the Jewish villages and told them to bow down to a Greek idol, then eat some pork – both practices that are forbidden to Jews. A Greek officer ordered Mattathias, a High Priest, to do these things. Mattathias refused. When another villager stepped forward and offered to cooperate on Mattathias' behalf, Mattathias drew his sword and killed the villager, then turned on the Greek officer and killed him too. That he struck out first against a fellow Jew indicates the simmering civil conflict between the Jewish factions.

Mattathias’ five sons and the other villagers then attacked the remaining soldiers, killing all of them. Mattathias and his family went into hiding in the mountains, where other Jews wishing to fight against the Greeks joined them. Led most prominently by Mattathias son, Judas Maccabee, the rebels retook their land from the Greek Seleucids. The Maccabean revolt succeeded.

Once the Maccabees had regained control, they returned to the Temple in Jerusalem. By this time it had been spiritually defiled by being used for the worship of foreign gods and for sacrificing animals the Jews regarded as unclean. Judas Maccabee restores and rededicates the Temple. That’s the Hanukkah story from First Maccabees, redacted in the late second century, relating the events of 350 years before. See 1 Maccabees 4: 36-59. (Click here).

If you followed the link and read the passage, you might have noticed that there’s nothing about a one-day supply of oil lasting for eight days. You would simply have read the decree that

But why eight days? That bit isn’t explained until a portion of the Talmud written about 600 years after the Maccabean Revolt. That’s where we get the story of the Maccabees discovering that almost all of the ritual olive oil had been profaned. They found only a single container that was still sealed by the High Priest, and thus had not been profaned. That container had only enough oil to keep the menorah in the Temple lit for a single day. They used this, yet it burned for eight days.

Why is eight significant? You might assume that that’s how many days it took to get the temple all cleaned up and re-consecrated. Actually, eight days is simply how long it takes to have new oil pressed and made ready so that the Temple menorah can burn continuously -- a sacred symbol and sign of Jewish freedom.

Posted by Meredith Garmon at 10:42