Remember That We Are Insane

There’s a little parable that has stayed with me ever since I was 17 and first read it on the sleeve of a comedy album by George Carlin -- his 1972 "Class Clown" album:

“In ancient times there was a country whose harvest came in, and it was poisoned. Those who ate of it became insane. 'There is but one thing to do,' said the King. 'We must eat the grain to survive, but there must be those among us who will remember that we are insane.'"

A wonderful parable for a comedian, isn’t it? Carlin’s life was dedicated to remembering that we are insane.

In the same way that we have to eat, we have to think. We can’t avoid it – and it wouldn’t be a good idea if we could. But can we remember, as we think, that we’re getting it wrong with every thought?

British-American physicist David Bohm emphasized that true dialog can’t have a purpose. If we're getting something wrong with every thought, it might be helpful to just talk without a purpose that we'd only be mucking up. Dialog may end up accomplishing a lot of things, but we can’t start out with an idea of: “Here’s our problem, and how are we going to fix it.” If we do this, we’re locked into thoughts about what the problem is, and what a solution would look like -- thoughts that are always awry.

In dialog, we bring our thoughts, but try not to be locked into any of them. Everything is up for grabs in the free flow of ideas. A dialog group is not like a problem-solving group, a strategy group, a planning group. It’s more like people sitting on the back porch sipping lemonade and gabbing about nothing in particular. In that context, anything can come up, and a thought at any level can be called into question without making people impatient to get on to the point. Indeed, whatever is being offered is the point.


“As soon as we try to accomplish a useful purpose or goal, we will have an assumption behind it as to what is useful, and that assumption is going to limit us. . . . In the dialogue group we are not going to decide what to do about anything. This is crucial. Otherwise we are not free.” 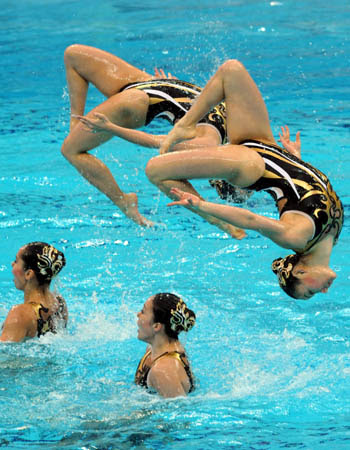 It’s rather like watching the Olympics. Did you watch any of the recent London Olympics? The athletes certainly have a very clear purpose, but those of us watching, we don’t do so to solve any particular problem we have. We just want to see something new about human possibility. The gymnastics, the synchronized swimming – the speed of the runners and the muscle of the weight-lifters – it’s just amazing. We want to see amazing possibilities.

I was watching a little bit of Olympics this week with LoraKim, and I said, “Did I tell you my idea for an Olympic event they should add?”

What a memory, that woman! OK, so she’s heard it. But I’m pretty sure, gentle reader, that you haven’t.

My idea for an Olympic event is: The Team Pentathlon: a Pentathlon of team sports. The same five people have to play together as a team in five very different team sports. They have to play basketball, and five-on-five versions of volleyball, water polo, team handball, and beach soccer. The same five people have to work together in all those sports. I love imagining what that would do to a group of people – the kind of connections and sense of each other they would have to develop in order to function effectively in five such different sports. Obviously, the players would be very focused on a purpose – winning – but what appeals to me is the thought that something without purpose would emerge: a knowing of each others’ movement so well that a flow of connection and oneness transcended their individuality as they merged into one thing. They would develop, I imagine, a oneness so palpable that even the British announcers would be compelled to say, “the team is” instead of “the team are.”

Ah, but five is much too few for David Bohm’s notion of a dialogue group. If you are remembering your experiences of gabbing aimlessly on back porches, perhaps you are thinking that those might have been relaxing and pleasant times but they didn’t exactly seem transformative to you. David Bohm noticed that, too.

Posted by Meredith Garmon at 13:50