Where Do You Live? 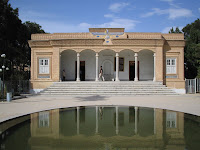 Where do you live?

Every day brings the daily stuff: jobs to do, relationships to maintain or develop, meals to eat, dishes to wash, telephones to answer, calls to return, calls to initiate, expectations to meet. Write the report, answer the emails, shop for the groceries, change the oil, change the filter, change the baby (don’t get them confused...), fix the scraped knee, fix the budget, fix the office copy-machine jam, fix your position, fix every mistake your parents ever made, fix the wobbly table leg, fix the broken window, fix the broken heart, fix yourself a drink.

Sometimes you have had a chance to, as the saying goes, get away from it all. Or sometimes right in the midst of all the daily stuff, unexpectedly you caught a glimpse of how wonderful and precious this life, how beautiful and perfect this world. You saw in a flash that there was nothing to fix. Time seemed to stand still. (For most of lives, our concept of "time" is a space for getting stuff done in – and when the stuff falls away, so does our usual feeling of time.)

Thus I ask: where do you live?

Religion is the communities we form and the practices we share in our attempt to integrate:
Religion is for integrating these.

Despite all these dimensions of difference, it has seemed at various times in my life – and perhaps in yours – that it was important to say they were all the same. Different paths up the mountain, perhaps, but all aiming for the same peak. All the world’s religions have a version of the Golden Rule: do unto others as you would have them do unto you.

Beyond the Golden Rule, however, it’s hard to say anything that that wouldn’t feel to some adherents of some religious tradition like a bit of a stretch if not an outright contradiction of their faith. Which raises the question: why does it seem important to put such stress on the claim of sameness? Suppose, instead of religion, we were talking about some other area of human activity – say, recreational activity. Some people play team sports, others individual sports, others go hiking, others play board games or card games or video games, others read novels. Could we say that all recreational activities are basically the same? Are they different paths up the mountain, but all leading to the same peak, which, in this case, would be called having fun? The case could be made, I suppose, that all recreational activities "are basically the same" -- but why would we want to make it? Few us would feel that it’s important to insist that all recreational activities are the same. Why, then, the urge to assert that all religions are the same?

There are two reasons, I think....

Posted by Meredith Garmon at 09:32